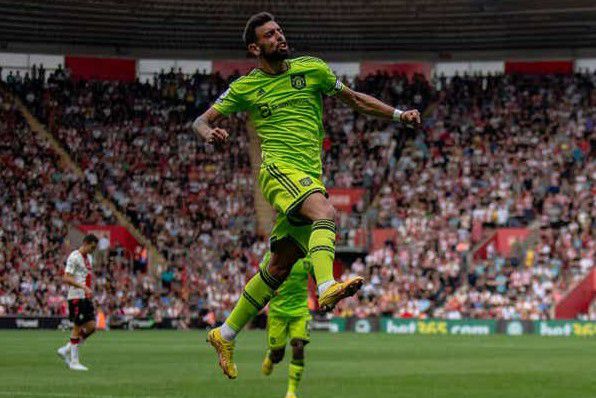 Manchester United ended their woeful away run with a momentum-building win at Southampton as Casemiro was handed his debut.

Bruno Fernandes shook off a poor first half to expertly sweep home Diogo Dalot’s driven cross for the only goal.

Casemiro started the game on the bench, alongside captain Harry Maguire and Cristiano Ronaldo, and was given around 10 minutes of his first outing to help United see out the game.

The victory, United’s second on the bounce, halted their seven-match losing streak on the road stretching back to last season and provisionally lifted them to sixth place after four games.

With an unchanged lineup after their 2-1 win against Liverpool, United should have gone ahead in the 19th minute but were denied by Gavin Bazunu and Armel Bella-Kotchap, who kept out Anthony Elanga and Christian Eriksen from close range.

Bella-Kotchap nearly gave Southampton the lead after bringing down a James Ward-Prowse corner only to blaze his shot over the bar on the half-hour mark.

Fernandes, leading the side in the absence of Harry Maguire, scored with a low volley from the edge of the box after being expertly fed by Diogo Dalot.

United boss Erik ten Hag turned to Cristiano Ronaldo and Casemiro, a fresh arrival from Real Madrid earlier in the week, to see out the game

and while Southampton dominated the ball, the hosts were unable to find an equaliser.