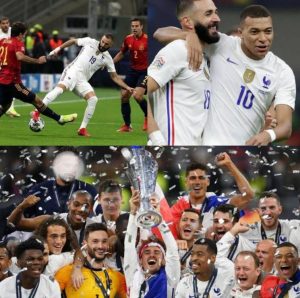 Kilian Mbappe claimed back his lost glory in France international team after he scored the winning goal for Les Blues.

For the second time in the match, Spain’s penalty appeals were waved away on 56 minutes.

When Aurelien Tchouameni sent Gavi tumbling in the box after making a firm but fair tackle.

But they hit the front in dramatic fashion soon after.

Benzema cannoned a shot off the underside of the bar from a France counter-attack,

and Spain raced up the other end, with Sergio Busquets feeding Oyarzabal to skip past Upamecano and shoot into the far corner.

Karim Benzema tied things up just 90 seconds later with a brilliant strike into the top corner.

And then we got the final we were hoping for: both teams opened up and started attacking each other, and we had some good chances for the two sides.

With 10 minutes to go, Theo Hernández played a through ball to an offside Kylian Mbappé.

But Eric García’s attempted interception fell to Mbappé who passed the ball into the net.

According to VAR, García’s touch played Mbappé onside and the goal was given, completing the French comeback.