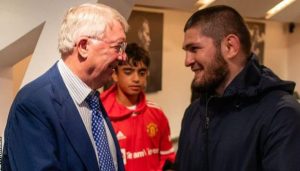 In a conversation with former UFC champion Khabib Nurmagomedov at Old Trafford, the legendary ex-United manager was filmed saying “you should always start with your best players”.

Cristiano Ronaldo was kept on the bench until the 57th minute of United’s 1-1 draw with Everton on Saturday.

Khabib then reminded Ferguson that Ronaldo came on in the second-half, before the Scot said players of his calibre should start.

Ronaldo appeared to storm off the pitch at full-time, looking frustrated and muttering to himself.

Lan Wright said on Match of the Day:

“When you’ve got Cristiano Ronaldo, you have to build a team and structure around him.So it can work for him.”

“If you’ve got him in your team, a match winner, and you can’t set it up for him to be playing in there, to do what he does, he’s going to walk off the pitch like that.”

“Me and him we understand more than the experts,”

“It’s about picking the right moments to play him, to not play him.

He’s not a young puppy anymore but he’s as professional as ever and ready to come on and he came on today with energy and attitude.”

United assistant manager Mike Phelan has agreed a new deal with the club until 2024.

Phelan was a member of Ferguson’s coaching team.

Before returning to Old Trafford when Solskjaer was initially appointed caretaker manager in December 2018.