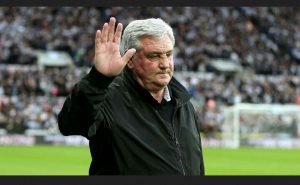 Manager Steve Bruce has left Newcastle United, the 60-year-old took charge of his 1,000th match as a manager in Sunday’s 3-2 defeat by Tottenham – his only game as Magpies boss under the new owners.

Steve Bruce said there had been “highs and lows” and that he hoped the new owners could “take the club forward”.

Graeme Jones will take interim charge of the Premier League side.

Newcastle said the appointment of a new manager “will be announced in due course”.

Bruce is understood to have received in the region of £8m after his contract was paid up in full.

The Tyneside club have made a winless start to the Premier League season.

And sit second from bottom after three draws from their opening eight games.

Steve Bruce was appointed Magpies manager in July 2019 and achieved finishes of 13th and 12th in his two full seasons in charge.

“I am grateful to everyone connected with Newcastle United for the opportunity to manage this unique football club.”

“And I would like to thank my coaching team, the players and the support staff in particular for all their hard work.

“There have been highs and lows, but they have given everything even in difficult moments and should be proud of their efforts.

“This is a club with incredible support and I hope the new owners can take it forward to where we all want it to be.

I wish everyone the very best of luck for the rest of this season and beyond.”

Bruce had a 27.4% win percentage from 84 league games at Newcastle,

which was the ninth best compared to previous Magpies managers who had been in charge of at least 20 Premier League matches.

A Newcastle statement said the club

“would like to place on record its gratitude to Steve for his contribution and wishes him well for the future”.

The club’s next game will be at Crystal Palace at 1500 BST on Saturday, 23 October.

“It’s not just about me; it’s taken its toll on my whole family because they are all Geordies and I can’t ignore that.

“They have been worried about me… especially my wife Jan.

We’ve got a good life so, yeah, this will probably be me done as a manager.

Until I get a phone call from a chairman somewhere asking if I can give them a hand. Never say never, I’ve learnt that.”

“I wanted so badly to make it work.

“And I was so proud to be manager of Newcastle United, even in the dark times.

I was determined to keep going and to keep this club in the Premier League.”

Newcastle forward Allan Saint-Maximin, who joined the Magpies in August 2019.

He is one of the side’s key players and he said it had been an “honour and a privilege” to have Bruce as his coach.

“You are, without a doubt, one of the most gentle people that I have ever met in the world of football,”

“You have been a man of your word, a caring man and a fair man who never hesitated to protect us.

I will never forget how you treated me, for that I will be forever grateful.”