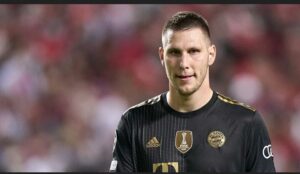 Niklas Sule sets to join Borussia Dortmund on a free transfer when his Bayern Munich contract expires at the end of the season.

Sule has been a regular fixture in the Bayern team since arriving in Bavaria back in 2017.

However, it is understood that he opted to reject Die Roten’s offer of a new contract as he did not feel significantly valued by the club.

On Sunday, the player’s agent confirmed that Sule‘s next move had been decided, though no specific side were mentioned.

That has changed now with the Frankfurter Rundschau reporting that Sule will link up with Dortmund in the summer.

It is little surprise that BVB are looking to strengthen at the back, as they have leaked plenty of goals this season.

They lost 5-2 to Bayer Leverkusen on Sunday and only three clubs in the entire Bundesliga have a worse defensive record than Marco Rose’s side this season.

Sule should add some much needed leadership and stability in the back four as Dortmund look to close the ever increasing gap on Bayern next season.

Prior to deciding on BVB, the Germany international had also been mentioned as a possible target for Chelsea,

who are growing increasingly concerned of losing Cesar Azpilicueta, Antonio Rudiger and Andreas Christensen in the summer.