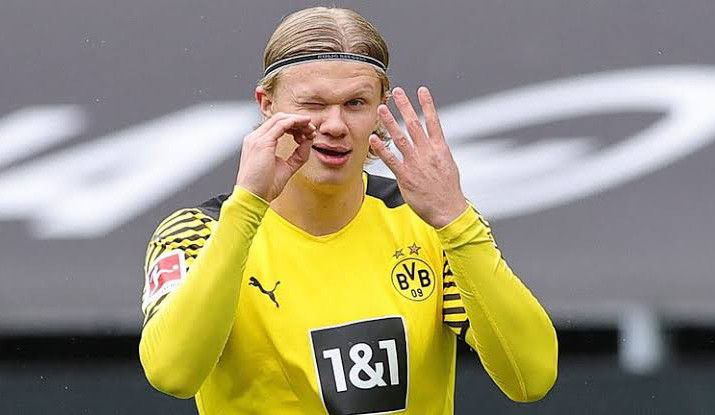 The Dortmund hitman Erling Haaland will be one of the most sought-after players in the summer transfer window.

Haaland transfer likely to come down to a direct battle between Manchester City and Real Madrid for his signature, and the Norwegian forward will base any decision on possible success on the pitch.

Manchester City have such vast resources combined with the perfect modern footballing structure that Haaland would be virtually guaranteed multiple Premier League titles should he sign with the Sky Blues.

What’s more, in a report published by ESPN, it is speculated that Haaland has dismissed any

possibility of a move to cross-city rivals Manchester United over their perceived inability to win major trophies.

The report continues to state that whilst Manchester United were one of the teams most interested in him during his Red Bull Salzburg career.

The 21-year-old now doesn’t trust the sporting project of the Old Trafford club.

Mino Raiola has informed Manchester United that Haaland feels as though the club can’t match his ambitions,

in spite of the fact they are believed to be closing in on hiring a new permanent coach.

ESPN claim that Manchester United would be willing to match any offer that is put to the forward by Manchester City or Real Madrid,

but they have been blown out of the water by the sporting plans at both of those clubs.

Manchester City have been careful with their wage budget for years,

offering bonus incentives rather than high base salaries.

Yet the club are believed to be willing to promise Haaland a salary that will make him the highest-paid player in England.

The Daily Mail reports that the Sky Blues are the frontrunners to sign Haaland,

although Real Madrid president Florentino Perez remains hopeful of pairing the Norwegian up with Kylian Mbappe ahead of the 2022/23 season.