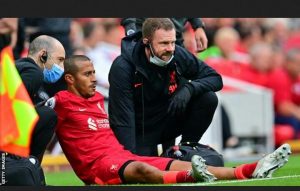 Alcantara picked up the injury in Saturday’s 3-0 win against Crystal Palace and the Reds will examine scans to discover the extent of the damage.

Liverpool visit Norwich City in the Carabao Cup on Tuesday before a league trip to Brentford on Saturday.

“I can’t say now how long it will take, but not Tuesday and not the weekend,” said Reds assistant Pep Lijnders.

“Let’s get the scan results back and we have a proper diagnosis.

“A shame as well because he was taking the game [against Palace] by the hand.

he was a proper playmaker in my opinion. A shame that we miss him.”

Read Also: Per Mertesacker Reveals How Long It Will Takes Arsenal Before They Could Back On Champions League

Lijnders ruled out the possibility of the full-back returning against Norwich, but there is a possibility he will be available in time for the trip to Brentford.

“Our game basically started at 12 o’clock against Palace;

he took responsibility to speak with the doctor,”.

“It was not easy because these guys – it says a lot about our group anyway.

They want to play everything, [even] if they feel a bit shaky or ill, but he took  the responsibility.

“There are no Covid symptoms. We test regardless.

He should be fine in a few days but Norwich comes too early.”

Liverpool will also be without Roberto Firmino when they face Norwich.

But the club have stated that the Brazilian is,

“set to resume team training this week” after missing their last three games due to a hamstring issue.