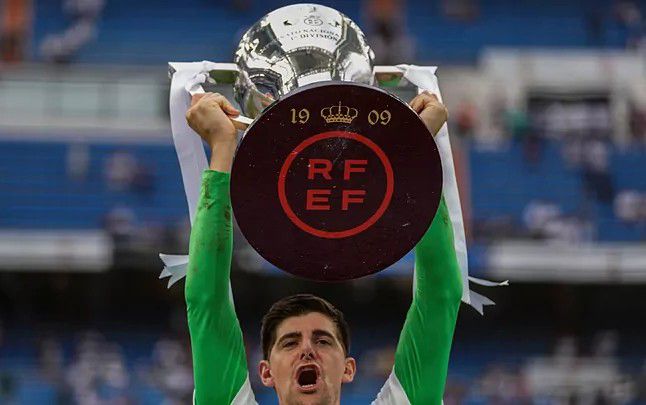 Former Chelsea goal keeper Thibaut Courtois spoke after Real Madrid’s win against Espanyol that clinched the LaLiga Santander title on Saturday, hitting out at Barcelona after the celebrations after thier latest Clasico win.

The Belgian goalkeeper, who does not usually bite his tongue, reminded Barcelona of their

celebration at the Estadio Santiago Bernabeu after their Clasico win.

“After the Clasico was the key,  “Some people celebrated as if they had won the title, that they were back.

“But we kept calm to beat Celta and in a difficult game and Getafe, which is always difficult for us.”

more than the others, according to Courtois.

Though there would be an argument to say that he is alongside Karim Benzema as one of the most important.

“This is the work of the whole team,” Courtois stated. “We all attack and defend.

“The game against Sevilla was the key, coming back from 2-0 down when everyone thought we were dead and that killed our opponents a bit.”

Coming into the game with Espanyol on Saturday, ahead of the Champions League

the Belgian was aware that there was pressure to get the job done.

“We had to finish it off today.”

“Everything was ready, also for our friends, family, fans.

“We knew we couldn’t slip. Espanyol gave us a very tough game at the beginning,

but we were calm and after the first goal everything was easier.”