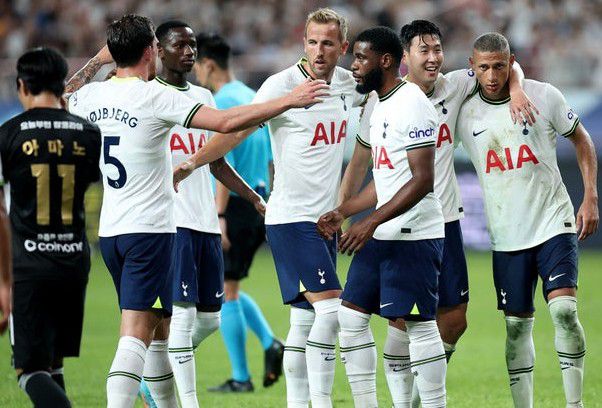 Tottenham made a winning start to their pre-season tour as a K-League XI were beaten 6-3 in a hugely entertaining friendly in Seoul.

Two Harry Kane goals, a Son Heung-min penalty, and a red card for the hosts, contributed to a lively nine-goal doozy at the World Cup Stadium.

Fans were also treated to a Richarlison debut, though fellow summer signings Yves Bissouma, Ivan Perisic and Fraser Forster were unavailable through either injury or illness.

Richarlison showed some neat touches in a first half alongside Bryan Gil and Lucas Moura, but was unable to mark his first minutes with a goal.

The scoring started with a stunning from Eric Dier, beating the goalkeeper from 25 yards, which was cancelled out on the stroke of half-time.

Kane was introduced at the break and saw his cross turned into the Team K-League net by a defender inside two minutes.

Again the hosts levelled, though, as Lars Veldwijk sweept home.

The England captain did similar minutes later to give Spurs the lead for a third time, before Son converted a penalty after a handball in the hosts’ defence.

Just three minutes later, Jun Amano beat Hugo Lloris with a free kick from almost 30 yards and then, shortly afterward, his team were reduced to 10 man after Son was dragged down when through on goal.

Kane stepped up and smashed home a free kick from the edge of the area and there was still time for Son to get his second, pouncing on a mistake to round the keeper, and conclude an entertaining encounter.