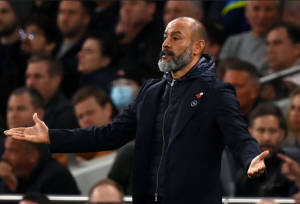 Nuno Espirito Santo has been sacked as Tottenham manager, the Premier League club has confirmed.

Just four months after being appointed, the decision has been taken to end the Portuguese’s tenure following a poor run of results.

He got off to a flyer with a maximum nine points from the opening three Premier League matches of the season.

Putting Spurs top of the table going into the September international break.

However, their form has plummeted since with five defeats in their last seven league outings.

There were also chants of ‘Levy out’ during the match.

As supporters turned on the chairman, Daniel Levy, as well as striker Harry Kane, too.

“The club can today announce that Nuno Espirito Santo and his coaching staff Ian Cathro, Rui Barbosa and Antonio Dias have been relieved of their duties.

“A further coaching update will follow in due course.”

“I know how much Nuno and his coaching staff wanted to succeed and I regret that we have had to take this decision.

“Nuno is a true gentleman and will always be welcome here.

We should like to thank him and his coaching staff and wish them well for the future.”

The north London outfit only appointed Nuno as successor to his fellow Portuguese Jose Mourinho on June 30.

Tottenham’s 17 games in all competitions since have featured seven defeats.

And the losses to West Ham and Manchester United in their last two Premier League matches,

have seen them go two hours and 16 minutes without having a shot on target.

Levy and Paratici now have the task of finding a permanent successor to Nuno.

A number of big names have been linked to the post.

Conte rejected the job in the summer but Spurs have reopened talks with the Italian and are promising to back him in the transfer market.

Should they fail to agree a deal for the 52-year-old,

Paulo Fonseca, who was understood to have been interviewed for the Spurs job before Nuno got it, is also in the running.