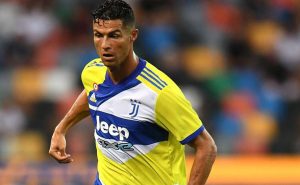 Ronaldo, who has entered the final year of his Juventus contract, is making no secret of his desire to leave the club and has spoken to City’s Portugal stars Bernardo Silva, Ruben Dias and Joao Cancelo.

City are willing to pay Ronaldo’s salary but would require a player-swap deal to land the 36-year-old, as they are unwilling to pay a major transfer fee.

The World Cup winner’s deal in Paris expires next summer

The Spanish giants are optimistic about getting a deal done before the transfer window closes next week, as they feel Mbappe will not sign a new contract in Paris with his current deal expiring at the end of next season.

While Madrid have been hit hard financially by the coronavirus pandemic, they feel they are in a position to force PSG into cashing in and acquiring one of the best footballers in the world.

Read Also: Andy Robertson Pen Down Another 3Years To Extends His Stay At Liverpool Till 2026

The Iran striker has entered the final year of his current contract and would like to join Lyon.

Lyon are also hoping to sell Houssem Aouar and Maxwel Cornet before next week’s transfer deadline to raise more funds.

Bayern Munich agree terms with Sabitzer but no deal yet

Bayern Munich have a verbal agreement with RB Leipzig star Marcel Sabitzer over a contract but the Bavarians have not decided whether to make a transfer bid.

Sabitzer has entered the final season of his contract with Leipzig and would like to join Bayern, whose sporting director Hasan Salihamidzic has been in close contact with Sabitzer’s agent.

The left-back will now decide whether to join the Premier League side in a move that would match their club-record transfer.

Marseille and Roma were also in the hunt for the 25-year-old, who will leave Leipzig after just one season.

Arsenal have also been linked with the 24-year-old, who only has 12 months left to run on his current contract.

Gladbach won’t let Zakaria go on the cheap, though, with it reported that they will demand at least £30 million ($41m) for a prized asset.

Pape Sarr to Tottenham, agreement reached and here-we-go. Deal set to be completed for €15m fee, personal terms agreed on verbal basis waiting for contracts to be signed. ⚪️🤝

Tottenham are now open to let Pape Sarr staying at Metz on loan until June 2022.

The Dutch midfielder continues to struggle for minutes at Old Trafford

Donny van de Beek’s agents have, according to The Times, been snubbing any interest shown in the Manchester United midfielder.

The Netherlands international remains determined to prove his worth at Old Trafford despite struggling for regular game time.

The Liverpool Echo reports that a summer move for Neco Williams is now looking unlikely.

The Wales international defender was expected to head out of Liverpool in the current window, with a number of clubs keen, but that interest has ended and no move is on the cards.

Tottenham and Juventus have no interest in doing a swap deal that would see Weston McKennie and Moussa Sissoko trade places, claims Fabrizio Romano.

The Bianconeri are open to parting with a USMNT star, but only if an offer of €25 million-plus (£21m/$29m) is tabled.

Davide Zappacosta’s proposed move from Chelsea to Atalanta is edging ever closer to completion.

The Italy international full-back is heading back to his homeland after struggling to make an impact in English football.

The Rossoneri are eager to bolster their options on the right by luring the 28-year-old away from Estadio Do Dragao before the transfer window closes.

Lille midfielder Jonathan Bamba is the subject of interest from West Ham, according to The Express.

The Hammers are looking at the 25-year-old as a potential alternative to Jesse Lingard, who returned to Manchester United earlier this summer after a loan spell at the London Stadium.

Bernardo not heading to Milan

Manchester City midfielder Bernardo Silva is not on the verge of completing a move to Milan.

It has been reported that the two clubs have agreed terms on a permanent deal, but there are no real signs that the Portuguese will join up with the Rossoneri this summer.

Pep Guardiola has confirmed that Bernardo wants to leave City, with Tottenham also being linked with a swoop for his services.

Bamba made 38 Ligue 1 appearances during Lille’s run to the title last season.

Valverde has spent the last six years of his career on Real’s books, having initially been snapped up from Uruguayan outfit Penarol as a teenager in 2016.

The 23-year-old has established himself as a key member of the Blancos’ squad during that period, and he has now been handed a bumper new deal that will see him remain at Santiago Bernabeu for the foreseeable future.

The Premier League champions want to bring in another goalscorer, but are losing patience with Spurs when it comes to a long-running saga involving England’s current captain.

Arsenal remain keen on Kieran Trippier, reports The Sun, but will need his asking price to be dropped in order for a deal to be done.

The Atletico Madrid right-back, who has also been linked with Manchester United, has a £34 million ($47m) release clause in his contract.

Manchester United have already knocked back an approach from West Ham for Jesse Lingard.

The England international playmaker starred for the Hammers on loan last season and is wanted back at the London Stadium amid fierce competition for places at his parent club.

Gunners prepared to part with captain

Arsenal are, according to The Irish Independent, open to offers for club captain Pierre-Emerick Aubameyang.

The Gunners will allow the Gabonese striker to head through the exits if a suitable bid is tabled before the summer transfer deadline.

Inter are looking at Torino’s Andrea Belotti as a potential replacement for Romelu Lukaku – according to Calcio Mercato.

The Nerazzurri have already snapped up Edin Dzeko from Roma, but the Bosnian is approaching the latter stages of his career at 35.

Belotti is eight years younger, and could fill the void left by Lukaku’s return to Chelsea in the long-term.

La Viola are eager to bolster their defensive ranks by signing the 24-year–old, who helped the French outfit when Ligue 1 last season.

Celik still has two years left on his current contract and is reportedly valued at around £18 million ($25m).

Lucas Torreira will be in Italy today in order to comple his medical and sign as new Fiorentina player. He turned down Eintracht bid.

Arsenal receive €1.5m loan fee. There’s no bid from Watford for Elneny – talks on but no agreement yet with Fenerbahçe for Kolasinac.

Spurs are trying to arrange a loan deal for the United States international until the end of the 2021-22 campaign.

Juventus are open to McKennie’s departure, but would prefer a permanent move to a loan.