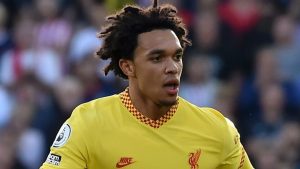 Alexander-Arnold was absent for Liverpool’s 5-1 win away to Porto in the Champions League on Tuesday.

Due to a “muscle issue”, while Thiago has not played since the 3-0 victory against Crystal Palace on September 18 he has a calf injury.

• Paul Parker: Manchester United Are Too Dependent On Cristiano Ronaldo As Their Sole Goalscorer

• Granit Xhaka Rules Out For Three Months Due To A Knee Injury Sustained In Sunday’s Victory Against Tottenham Hotspur.

“No news means they are doing well but they won’t have enough time for being back against City.

But I expect them both to be back after the international break.

“But we have a good team so we still have solutions and we have to use them.

After the international break the boys will be back I think.”

Liverpool go into Sunday’s game against City as the only unbeaten team remaining in the Premier League.

And, they will be looking to maintain their one-point advantage over Pep Guardiola’s side at the top of the table.