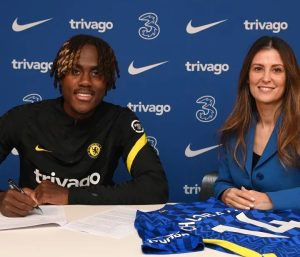 Chelsea defender Trevoh Chalobah has signed a new four-and-a-half-year contract at the club.

Making 10 appearances for Thomas Tuchel’s side this season, the 22-year-old has impressed at Stamford Bridge.

Chalobah’s Premier League debut came on the opening day of the season with a wonder goal at home to Crystal Palace.

After turning professional under AntonioConte and following loan spells at Ipswich,Huddersfield and Lorient, the Sierra Leone-born player has broken into the first team, making five starts for the league leaders.

Also Read: Saha: ‘If You Dislike Ronaldo As A Teammate, It’s Because You’re Not A Hard Worker’

“It’s a dream for me to sign a new long-term contract for my boyhood club,and opefully the dream continues,”

“It’s been an unbelievable start to the season and something I never expected.

But it just shows that the hard work I’ve put in and going out on loans has paid off,”