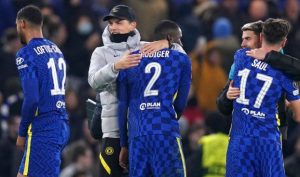 Thomas Tuchel gave an injury update on two important Chelsea stars after his side’s ‘amazing’ performance against Juventus in the Champions League.

Trevoh Chalobah, Reece James, Callum Hudson-Odoi and Timo Werner all struck in a comprehensive 4-0 victory to sink the Italian giants and march an imperious Chelsea into the last 16.

Chelsea booking their place in the knockout stages but also overhauling their Serie A rivals at the top of Group H.

Match or better Juve’s result in the final set of round-robin fixtures in early December and the Blues will top the group.

Chelsea’s sole concerns on a raucous west London night proved injury scares for N’Golo Kante and Ben Chilwell, who both hobbled out of action well ahead of time.

“We wanted to stay patient but at the same time not fall asleep. We wanted to increase the rhythm and intensity.

It’s so tough to create and score but we created so much. An amazing performance and a fantastic result.

“We were sharper than in Turin, we took more risks, something we lacked in Turin.

By control you cannot hurt them – you need to penetrate with runs off the ball. We were very good and scored nice goals.

“I feel very aware that we do the invisible work and when we have to defend we really defend and dig in.”

As for the injuries to Chilwell and Kante:

“Ben has a sharp pain in the knee. N’Golo twisted his knee a little bit.

“They will both be examined today. They are very sad things because N’Golo was very good before he went off and Chilly has been in a fantastic moment.”