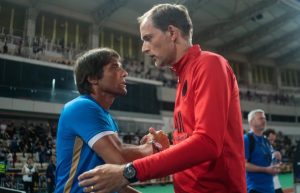 Chelsea boss Thomas Tuchel has promised that he will not look to copy Antonio Conte’s tactics at Inter last season in order to bring best out of Lukaku’s at Chelsea this year.

Romelu Lukaku racked up 24 goals and ten assists en route to winning the 2020/21 Serie A title with Inter.

But life hasn’t been as rosy since his £97.5m return to Chelsea in the summer.

He has just five goals in his first 13 matches and recently had to apologise after giving an unauthorised interview in which he voiced his frustration about Tuchel’s use of him.

Before he joined Tottenham, Conte confessed that he was unsure of Chelsea’s use of Lukaku.

Insisting that Tuchel must figure out a better way to build his team around the Belgian if he wants to maximise his impact.

In the fallout of Lukaku’s interview drama, Tuchel was asked whether he could look at mimicking Inter’s tactics, but the boss insisted it’s not that easy.

• Romelu Lukaku Apologies To The fans: ‘I Must Restore Trust’

“We cannot just play like Inter played and hope that will bring the best out of Romelu.”

That system he played at Inter did not only suit Romelu and the second striker Lautaro Martinez, it fits the whole squad.

“If you don’t have five defenders you cannot play with a back five.

It’s as easy as that. If you don’t have a winger you cannot play with a winger.

Conte played 3-4-3 at Chelsea. At Inter he played 3-5-2. Obviously he is adapting to his players and implementing his ideas, and this is what I do.

“I put my players in positions where they are confident they can help the team.

This is what Antonio Conte does in every league he works, at an outstanding level.

I have nothing but full respect. He is such an emotional and influential coach at the sideline.

I really love to watch his team play. It will be a pure pleasure to play against him.

“We are fully aware how successful he was at Chelsea.

And I have no doubt he will be successful at Tottenham. He is a top, top top level coach, no doubt.”