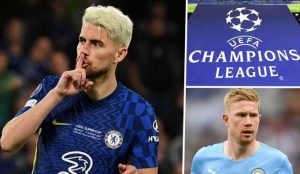 UEFA will be handing out individual awards to some of the best players from the 2020-21 season,

with plenty of prestige associated with the continental accolades.

So what are the UEFA awards and which players are nominated for them this year?

All about UEFA awards

The UEFA awards are a set of annual prizes given to individual players and coaches,

in recognition of their performances over the previous season.

there are also categories devoted to the best goalkeeper, defender, midfielder and forward.

Winners are decided by a jury, which comprises the 32 coaches of the teams that competed in the 2020-21 Champions League group stage and 55 journalists from UEFA’s 55 member associations.

Coaches are not allowed to vote for their own players.

Below are the all the nominees

The three men’s Player of the Year nominees come from the Premier League,

Jorginho is considered a frontrunner for the award having helped Chelsea to Champions League glory while also clinching Euro 2020 with Italy.

All three of the nominees for the women’s Player of the Year award are drawn from Barcelona,

who won the Women’s Champions League, the Superliga Femenina and the Copa de la Reina.

while Thomas Tuchel’s maiden Chelsea campaign, in which he won the Champions League, earned him a nomination.

Pep Guardiola is the final nominee after steering Man City to the Premier League title.

Luis Cortes’ trophy-laden season with Barcelona sees him in the nominees,

Also Read: Mikel Arteta Believed Aubameyang Will Back To His Best As Fans Are Back To The Stadium

Goalkeeper of the Season nominees

Defender of the Season

Midfielder of the Season

Forward of the Season

Women’s Goalkeeper of the

Women’s Defender of the

Women’s Midfielder of the

Women’s Forward of the

Europa League Player of the