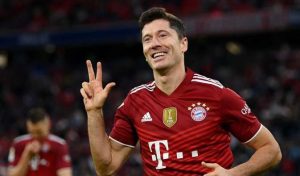 Robert Lewandowski brought up his triple century of goals for Bayern Munich on Saturday as the Poland star’s hat-trick helped the Bundesliga champions breeze past Hertha Berlin 5-0 in a one-sided encounter.

Lewandowski picked up right where he left off at the end of the last Bundesliga season and went into the weekend clash with two goals in as many games.

And he is now right back on top of the league scoring charts, which he has topped for six of the last eight years.

The Bayern star might have turned 33 last Saturday, but if anything he is only becoming more deadly as the years go by.

In 2020-21 he set a new personal season best, netting an incredible 41 goals in 29 Bundesliga games to mark his biggest league return since arriving in the German top flight with Borussia Dortmund back in 2010.

If anything, he looks more than capable of passing that mark again if the evidence of these first three games is anything to go by.