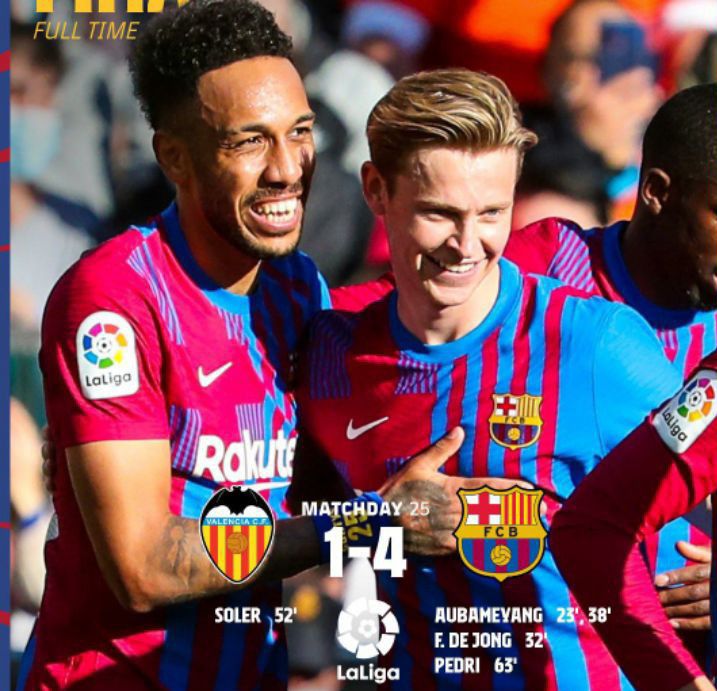 Pierre-Emerick Aubameyang scored his first Barcelona goals by registering a hat-trick as they extended their unbeaten run in La Liga to nine matches with victory at Valencia.

Aubameyang, who joined from Arsenal for free on 2 February, slammed in the opener on his first La Liga start.

Frenkie de Jong tapped in a second and Aubameyang converted from close range, despite a VAR check for offside.

Carlos Soler pulled one back before Aubameyang notched a fortunate third.

Substitute Pedri appeared to have scored Barcelona’s fourth but his powerful 25-yard effort glanced Aubameyang’s back on its way in.

The goal was initially given to 19-year-old Pedri but was later awarded to Aubameyang.

He could have added a fourth goal late on when a ball fell his way in the box, only for home keeper Giorgi Mamardashvili to deny the 32-year-old.

Valencia – now seven games without a win in the league – thought they had made it 3-1 before the break but Soler was denied, with VAR for the first time ever ruling out a goal in La Liga, because the ball had gone out of play for a throw in.

Soler powered in a diving header after half-time but Aubameyang’s deflected third put an end to any comeback hopes.