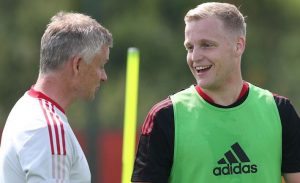 The Dutchman  tells Rio Ferdinand’s FIVE podcast about his relationship,

with Ole Gunnar Solskjaer and what he considers his best position to be.

Van De claims he might have departed United in the recent summer window,

with the Dutchman revealing positive discussions with the club ended any prospect of a premature exit.

“I speak with the manager about it and the club,”

“They were clear they wanted me to stay here.

The manager was really positive about me and he said, ‘I need you and I want to keep you here’.

“Of course, what I see here now in the beginning of the season is difficult because,

I didn’t play one minute, but he said,

‘What I see every day in training, I see a different Donny now’.

“I need to trust him. If he doesn’t need me, I think he will let me go. I think he has plans with me.”

Playing against the backdrop of a global pandemic and adjusting to a new country,

made the acclimatisation process for Van de Beek a challenge.

The midfielder has yet to deliver consistently at United, displaying flashes of the form,

and potential that he showed after coming through the youth system at Ajax.

However, he has started just four Premier League games since his arrival,

and it has not always been entirely clear if Solskjaer knows what Van de Beek’s best position is – something the player acknowledged.

“This is football and I think you can never promise a player if he will play – or not.

You can train every day hard, but in the end you need game time to show your best shape.

If you play once in a month or anything, you cannot show your best,”

“I think I can do (play as a six) but, of course, I don’t know what the manager thinks or what he expects from me.

I’ve played in this role before with Ajax.

“That depends on how you play as a team.

For how we play, I think the best position for me is a number six or eight.”