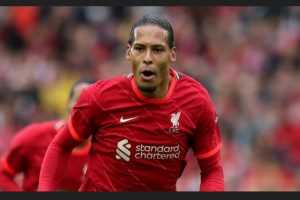 The Dutchman becomes the latest Reds star to commit his long-term future to the club, and will remain at Anfield until 2025

Virgil van Dijk has signed a new contract which will keep him at Liverpool until 2025.

The Dutchman becomes the latest Reds star to commit his future to the club, having agreed terms on a four-year deal which will make him one of Liverpool’s top earners.

Van Dijk, who had less than two years left on his previous deal, follows in the footsteps of Trent Alexander-Arnold, Alisson Becker and Fabinho, all of whom signed long-term extensions earlier in the summer. Sportdaylight understands that a new contract for Mohamed Salah is Liverpool’s next priority, with Anfield sources confident the Egyptian will agree a lucrative renewal of his own.

“Since day one when I joined the club, I felt so much appreciation from the fans and from my teammates and the staff, that I could be a very important member of this football club.

“It has been going well; unfortunately last season for me personally has been a season to forget, to learn from and take with me, but I have enjoyed my time here and will keep enjoying it in the next couple of years altogether with all of you.”

The Dutch defender joined the Reds from Southampton in January 2018 for a club-record fee of £75 million ($104m), and has proved to be a worthy investment as he has helped Jurgen Klopp’s side to Premier League and Champions League titles.