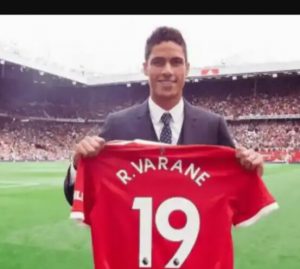 The read devil’s  have made a splash in the transfer market this summer, with their acquisition of Raphael Varane,

one of the biggest deals of the window so far. The Frenchman has spoken about his move to Old Trafford, reflecting on his departure from Real Madrid.

Varane explained that, after winning 18 titles in 10 years at Real Madrid, he was ready for a fresh challenge.

Having now experienced the buzz of the home atmosphere during his new club’s opening Premier League match against Leeds United, he is excited to take to the pitch.

I came here because I wanted new emotions,” he explained in an interview with Manchester United’s official club media.

“Seeing the fans against Leeds United was what I expected and bigger. It was massive. It was a great moment”.

Read Also: Our Game Can Be More Collective Than Before, But I’d Prefer To Have Messi In My Team. Says Koeman

“I want to say thank you to the fans and I will do my best, leaving everything on the pitch.

I had a very good adventure with my old club, but now it’s a new start for me and I’m very happy to be here.”

Pressed on why and when he decided to depart Real Madrid, Varane brought up the fact that he was even linked with Manchester United as far back as when he originally left Lens for the Spanish capital.

“There have been a lot of rumours, a lot of people speaking about me and Manchester United since 2011 when Sir Alex Ferguson came to my mother’s house,” he explained.

“When [the decision to move] was real was when I spoke with my former club. I felt a real opportunity to play in the Premier League and for Manchester United.

“It was a good moment [to move]. The most important thing is that it’s a new challenge and I have motivation to start in a new league and with a big club like Manchester United. This opportunity was amazing for me, so I decided to choose this change.”

Varane describes his relationship with Pogba

During the interview, Varane was also asked about Paul Pogba. Even though the midfielder is continually linked with a potential transfer away, the centre-back believes they’ll work well together if Pogba stays.

“We are different, but I think we complement each other,” Varane said of his relationship with Pogba.

“I’ve known him for a long time, as we started together with the French national team. He’s a good player and he’s ambitious and I am too. We’re ready to do all we can to try to win trophies.”

Varane wasn’t found to make his debut against Leeds United last weekend, having had to spend time in quarantine, but the centre-back is now in training and will aim to feature against Southampton on Sunday.