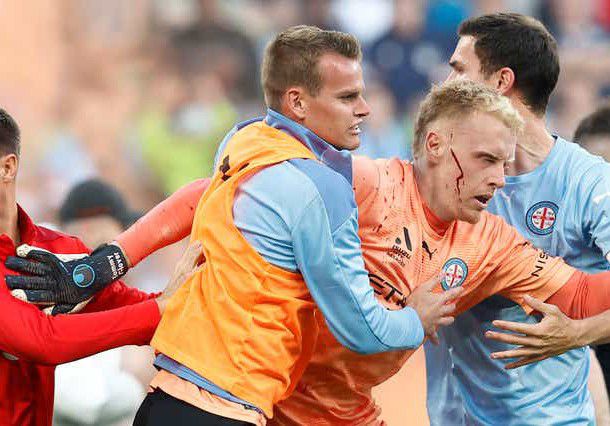 Melbourne Goalkeeper was injured as a fan protest turned to violent, that resulted match being abandoned.

Spectators stormed onto the playing surface amid absolute chaos during the A-League contest between Melbourne City and Melbourne Victory at AAMI Park,

with video footage showing Glover being struck by a metal bucket hurled dangerously by a pitch-invading supporter.

Glover was left with a cut and bloodied face, with his club tweeting that the player had likely sustained a concussion and was receiving further treatment to the wound in the dressing room.

The bucket – used for disposing of flares – also appeared to strike referee Alex King, who was left covered in ash as he immediately suspended the game.

required to restore order after a disgraceful episode in troubled times for Australian football.

Further video footage then emerged that seemed to show Glover throwing a flare that had been lobbed in his direction by fans behind the goal back into the Victory section of the crowd, from where the pitch invasion then came. 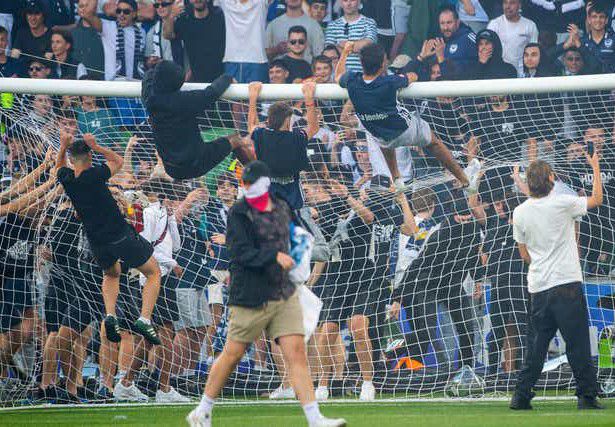 Flares had been thrown onto the pitch by both sets of fans throughout the evening, with reports than one appeared to hit a television cameraman.

A-League leaders Melbourne City had been leading a highly-charged derby 1-0 at the time of the incident after Aiden O’Neill’s terrific early strike.

Tensions had been running high all week ahead of the game, with fans from both sides having

A-League by the Australian Professional Leagues (APL), particularly the recent decision to sell both the men’s and women’s grand finals to Sydney in a deal worth a reported $12million.