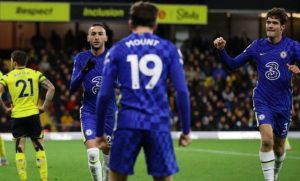 Chelsea were “lucky” to remain at the top of the Premier League after being given a scare in their victory at Watford, said boss Thomas Tuchel.

The under-par Blues needed a goal from substitute Hakim Ziyech to edge out their hosts after Hornets forward Emmanuel Dennis had cancelled out Mason Mount’s opener.

With title rivals Manchester City and Liverpool both victorious, Chelsea would have slipped to third had they drawn – but Ziyech ensured they still lead the way.

“We were not ready for this game,”

“We are to blame. We never found the right attitude. We were very lucky to escape with the win.”

Watford had twice gone close to taking the lead when England midfielder Mount broke the deadlock with a first-time finish at the end of a lovely move involving Marcos Alonso and Kai Havertz.

The Hornets equalised after Ruben Loftus-Cheek lost possession and Moussa Sissoko set up Dennis, who scored with a shot that deflected off Antonio Rudiger.

But having scored his side’s first, Mount then set up the winner by providing the pass for Ziyech to fire past Daniel Bachmann.

Chelsea’s fifth straight Premier League away win kept them one point clear at the top.

The game was halted for 32 minutes with the score 0-0 while a fan, who had suffered cardiac arrest in the stands, was stabilised.