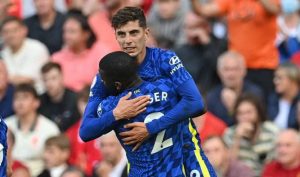 Chelsea boss Thomas Tuchel is determined to help Kai Havertz reach his full potential, and will not permit any slacking off from the young star along the way.

After a difficult start to life in the Premier League following his move from Bayer Leverkusen in 2020,

Havertz is now considered a key part of the Blues team.

And Tuchel is delighted to see him working hard to fulfil his undoubted potential.

“I found him very strong when we came back,”

“And,I was pleased with his attitude to training and the pre-season matches very early in the season.

I felt him very self-confident after his end to the season after he was very decisive in the Champions League.

“He didn’t lean back on that and took it as a given that he has made an impact now and has his place.

Havertz is fighting hard with a different attitude and self-confident.

He is also using his body to play physically in training,

if he misses in training, he still takes the next shot with full belief.

“These are little details where I could see that he is in a good place.

This is what we demand because the guy is so full of talent that we won’t let him relax for a second.

“If you have this amount of talent, we will push him to the absolute maximum and this guy has the body, talent and head.

He has everything and the belief to play at the very top level.

This is it. I felt him a little bit tired after the national break where he was a bit ill,

during his matches for Germany but now he is in very good shape.

“He had a good physical impact versus Zenit where he came off the bench.

We count on him. He’s super important for us.”