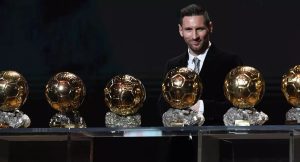 The 2020 Ballon d’Or awards were cancelled because of the impact of the coronavirus pandemic. However the 2021 event will go ahead to decide the best player in both men’s and women’s football over the course of the last year.

This year’s Ballon d’Or awards will decide the best player in men’s and women’s football over the past year.

Awards are scheduled to take place in November.

After the 2020 event was cancelled as a result of the coronavirus pandemic.

Thirty men and twenty women are nominated for the respective rewards.

The women’s award began in 2018 when it was first awarded to Ada Hegeberg.

And the current holder is American Megan Rapinoe.

The men’s award was launched in 1956, with the current holder being Lionel Messi.

The judgments are made on the basis of the last 12 months’ performances from players.

Here is all the information you need for the Ballon d’Or 2021.

WHO IS LIKELIEST TO WIN?

After last year’s cancellation this is perhaps the last chance to recognise two players who could soon start to fade.

Lionel Messi has made a dramatic free transfer move to Paris Saint-Germain.

And while there have been flashes of his continued brilliance.

He has not hit the heights we expect from his career at Barcelona.

It may just be a case of the Argentine settling in at his new club.

But at 34 there is a growing chance that age could start to curtail the six-time winner’s abilities.

Despite all the drama of Covid-19 and Barcelona’s implosion though, Messi put in some of his very best performances as the team struggled domestically and in Europe.

So his peers may feel compelled to recognise him for a seventh time.

At 36 he was Juventus’ best player last year, but the Italians also failed on both major stages.

And it led to Ronaldo breaking off his time in Turin to return to Manchester.

Two years old than Messi, it seems unlikely that he will get the chance to equal Messi’s six awards, trailing by one.

Others in with a chance are Karim Benzema, Roberto Lewandowski, Ngolo Kante, Mohammed Salah and Romelu Lukaku.

But the dark horse to take the trophy is probably Jorginho, after performances at the heart of both Chelsea’s Champions League win and Italy’s Euro 2020 triumph.

In the women’s side, Alexia Putellas, the current holder, is favourite to hold onto the trophy.

The Barcelona striker was key to her side’s Champions League win, scoring a penalty.

Other potential winners could be Chelsea’s Sam Kerr and another Barcelona player, Jennifer Hermoso.

WHO IS THE BOOKMAKERS’ FAVOURITE TO WIN?

It will be held at the Theatre du Chatelet in the heart of Paris, France’s capital city.