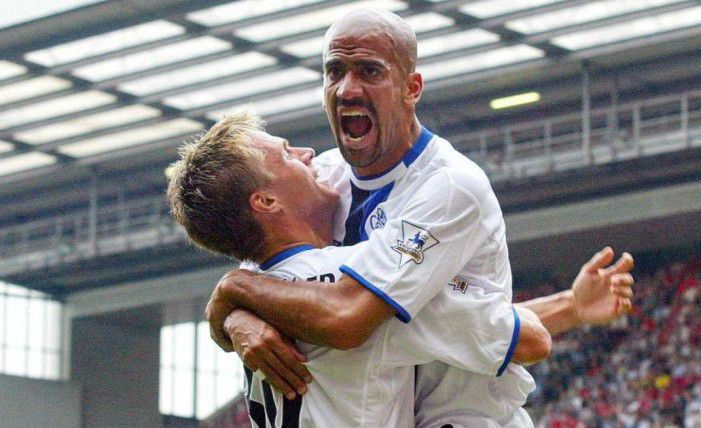 Chelsea played their first Premier League game under the ownership of Roman Abramovich On August 17, 2003.

Many players – and managers – have come and gone since Abramovich took control of the club.

But during that period no English team has won more trophies than Chelsea,

and the opening fixture of the following season was also against the Reds.

We’ve looked back at the starting XI that secured another 2-1 win that day at Anfield.

Cudicini had already been with Chelsea for three years before the arrival of Abramovich,

establishing a reputation as one of the better goalkeepers in the Premier League.

before losing his place to Petr Cech the following season.

But Cudicini stayed loyal to Chelsea until 2009 when he joined Tottenham.

He returned to Stamford Bridge as a club ambassador and assistant to Antonio Conte in 2016,

with his role seeing him act as a ‘go-between’ to ease tensions between Conte and the board.

Despite Conte’s sacking, Cudicini remained in both positions under Maurizio Sarri until the appointment of Frank Lampard.

Johnson was one of Chelsea’s debutants in Abramovich’s first match in charge,

having been signed in a £6million deal from West Ham in what was the first transfer to be completed under the Russian.

The former England international never truly established himself at Stamford Bridge and was loaned out to Portsmouth after two seasons before joining them permanently.

Some 14 years on from his Chelsea debut he was being linked with a move to Barcelona while playing for Stoke.

The move never materialised, of course, and Johnson officially announced his retirement in January 2019 having been released by the relegated Potters at the end of the 2017-18 season.

Since hanging up his boots, he’s become the founder of an investment company and has also appeared on beIN Sports, talkSPORT and Sky Sports.

The last surviving player of the pre-Abramovich era, Terry eventually left Chelsea for Aston Villa at the end of 2016-17 having just lifted the fifth Premier League title of an outstanding 19-year career at Stamford Bridge.

He was unable to help Villa back into the Premier League as a player, suffering defeat in the play-off final against Fulham in 2018,

but he returned to the club later that year as assistant manager to Dean Smith as the club leapt that final hurdle against Derby County.

The 41-year-old left his role at Villa at the end of the 2020-21 season and recently returned to Chelsea to begin a coaching consultancy role at their academy.

A goalscorer in that crucial final-day victory over Liverpool the previous season, 2003-04 would prove to be Desailly’s final campaign in a Chelsea shirt.

A legend of the game, Desailly now devotes his time to punditry and charity work.

We spoke to him ourselves in 2018, with the World Cup winner confessing he does not particularly miss life as a player.

“I have my charity work, I do some media and I have a life that is more simple than when you are a footballer,” he said.

Another Chelsea debutant on that day, Bridge had been signed from Southampton for £7million.

His best moment in a Blues shirt would come later that season as he knocked Arsenal’s Invincibles out of the Champions League quarter-finals with the winning goal at Highbury.

Bridge was never really fancied by Jose Mourinho and went on to join Manchester City,

He retired in 2014 after a season at Reading and has since appeared on I’m A Celebrity Get Me Out Of Here and regularly plays in poker events.

Scorer of the winner against Liverpool on the final day of the previous season,

Gronkjaer began the new campaign by providing the assist for the opener at Anfield.

The Dane went on to spend short spells at Birmingham, Atletico Madrid and Stuttgart before settling at FC Copenhagen.

He retired from top-level football in 2011 but returned five years later to play for FC Graesrodderne (FC Grassroots),

a Danish seventh-tier team set up in 2015 for former professional players who missed the game.

The arrival of Jose Mourinho prompted the departure of many of the players who helped establish Chelsea in the top four of the Premier League,

but the Portuguese kept Geremi around for three years, describing the versatile Cameroonian as “an important person and somebody we love very much”

when he eventually left for Newcastle in 2007.

“I want to develop and improve football in Africa,” he told Goal in 2021.

“People love football and it concerns me why our politicians don’t see its importance. Football made me what I am now.”

Neither Manchester United nor Chelsea ever really saw the best of Veron on a consistent basis, but he did smash home the opener at Anfield.

Once Mourinho took over at Stamford Bridge the midfielder was immediately loaned out to Inter Milan.

He briefly came out of retirement for a fifth spell at Estudiantes at the age of 42 in 2016 and is now the Argentinian club’s chairman. 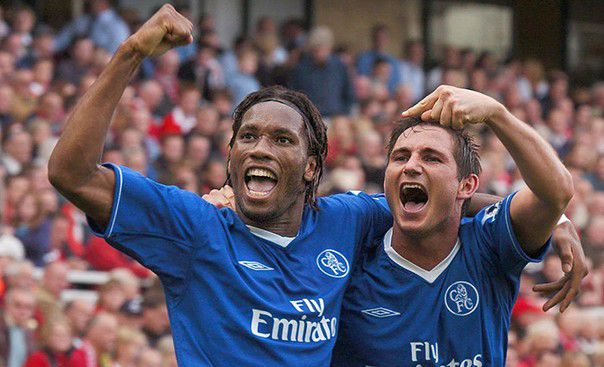 Ranking alongside Terry as the lifeblood to Chelsea’s sustained success under Abramovich,

the midfielder became an icon at the club before moving on in 2014.

After retiring in 2017, Lampard established himself as one of the most articulate pundits on television before being appointed Derby County manager in the summer of 2018.

After a season at Derby, he moved back to Stamford Bridge as the main man having been chosen to succeed Maurizio Sarri.

In his first season in charge, he led the club to a Champions League spot,

and the FA Cup final but was sacked in January 2021 and replaced by Thomas Tuchel, who clinched the club’s second European Cup in May.

Lampard returned to management a year later, signing a two-and-a-half-year contract with Everton.

The final debutant to start for Chelsea in the first match under Abramovich,

Duff was the most expensive signing during the Russian’s first summer, costing £17million from Blackburn.

Duff would go on to play the best football of his career under Mourinho before an unhappy spell at Newcastle was followed by a return to form at Fulham.

His playing career ended with a spell at Shamrock Rovers, where he began his coaching career.

He also had a role in the Republic of Ireland youth set-up,

and in January 2019 he took over as Celtic’s reserve manager before being promoted to first-team coach a month later.

Then, in April 2020, Duff was announced as assistant manager of the Republic of Ireland senior team.

He stepped down from the role in January 2021 and was later appointed manager of League of Ireland side Shelbourne.

Another player to earn the trust of Mourinho, and arguably one of the most underrated forwards in Premier League history.

He joined Barcelona in 2006 before going on to play for another 11 clubs in a nomadic end to his career,

eventually hanging up his boots after 22 years in 2016 following a brief spell at Molde.

The 43-year-old recently spent a year working as the assistant manager of the Icelandic national team before leaving the role in November 2021.

Did they sell him too soon? The striker came off the bench to score the winner at Anfield but left Stamford Bridge once Mourinho took over.

He has gone on to manage Royal Antwerp, Burton Albion, QPR and Northampton Town and is now back at Burton for a second spell.

One of the few players to turn out for Chelsea, Arsenal and Spurs before finishing his career with Perth Glory.

Came off the bench to make his Chelsea debut at Anfield and, like Duff, played the best football of his career under Mourinho.

His career in England petered out and he eventually retired in November 2018 after a spell with Tampa Bay Rowdies in the United Soccer League.

He went back to Chelsea in a coaching role with the academy but quit in 2020 and now works as a pundit for BT Sport.