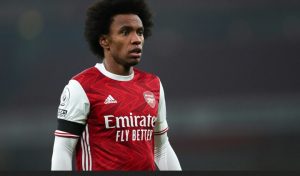 Former Chelsea wenger Willian has lifted the lid on his dreadful season at Arsenal, admitting he wanted to leave the club within three months of arriving.

The Brazilian star joined the Gunners in the summer of 2020, signing a huge three-year deal worth £240,000-a-week.

Willian wanted to stay at Stamford Bridge, but the Blues would not sanction a three-year deal, so the Gunners offered a chance to stay in London.

But despite starring for Chelsea in the previous campaign, Willian suffered a woeful drop in form upon arrival at the Emirates.

The 33-year-old finished the season with one Premier League goal in 25 appearances, drawing criticism from supporters, especially given his Chelsea past.

Asked whether hateful messages from fans influenced his decision to leave,

“Yes it did (help me make my decision).

“I received a lot of messages on social media from them, but also because I came from Chelsea I think if I came from another club maybe the fans would be better.

“But because I come from Chelsea and I didn’t perform well and because of them, I think about that and I have to go.”

Arsenal have been made to regret numerous lucrative, long-term contracts for ageing players in recent years.

The Gunners had to pay-off the remaining six months of Mesut Ozil’s £350,000-a-week deal in January – and now face a similar situation with Pierre-Emerick Aubameyang.

But Willian refused to be a problem and agreed to terminate his contract last summer, turning down £20million to seal a free transfer to Corinthians in Brazil.

“I was not happy, that’s why I didn’t perform. I don’t want to go into the details, but I wasn’t happy.

“So, when I arrived there I was happy, from the beginning I was motivated, I wanted to do well, new club, new mates, new projects.

After three months, I told my agent, ‘Please, I want to go’. I don’t want to speak bad about the club because it is a big club,

has a big history in football, big players played there before it’s a big club – but it didn’t work, it was of course the most difficult time of my career.

“It was big money that I gave up. But sometimes money is not the most important thing in life.

I think you need to be happy, get pleasure every day waking up in the morning to go to train. I wasn’t having that.

“I said to myself, with my family, I cannot stay here, I am not happy here. I have to leave, find a way out, leave the club, because if I stay I am going to stay the same.

For me, it’s unfair to stay in a place that you don’t want to stay just because of the money. For me, it was that.”