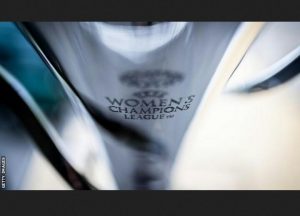 This is the first Women’s Champions League to have group stages. It previously went straight into knockout rounds

Wolfsburg, Juventus and Servette in Group A of this season’s tournament.

Arsenal are in with Barcelona, who beat Chelsea in the final.

Chelsea beat Wolfsburg, who have been in five finals since 2013, in last season’s quarter-final – their fifth meeting in seven seasons.

This is the first Women’s Champions League season to have group stages.

The top two teams from each group will progress to the quarter-finals.

Read Also: ‘Departure Of Messi Was A Shock’ But, Busquets Believes Barcelona Can Win Champions League Without Him

Lyon, who had won five Champions Leagues in a row until last season, are in Group D with Bayern Munich.

Real Madrid are in their first season in the tournament under their current name and are in Group B with Paris St-Germain, Breidablik and Kharkiv.