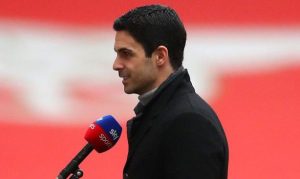 Former Arsenal star Ian Wright believes Mikel Arteta has three players to thank for the huge improvement in Arsenal’s fortunes – and ultimately saved the Spaniard from the sack.

The Gunners are riding high after a run of eight wins in their last 10 games.

As such, Arsenal are now higher than Manchester United in the table, having not lost a game since a 5-0 setback at Manchester City at the end of August.

The basis for that run of form has been the solidity at the back.

Indeed, they have conceded just four goals in the last 10 games, keeping seven clean sheets in the process.

And it is the partnership of summer signing Ben White alongside Gabriel Magalhaes that has proved to be key.

White missed a short spell earlier in the season through illness.

Brazilian Gabriel, meanwhile, has overcome a knee problem to take his place alongside him.

The pair have proved a solid partnership at the back. Indeed, the improvement in Arsenal after the signing of ‘transformative’ star White was something we very much predicted.

Now Wright has picked out the pair as key to their revival and says the pair have exactly what’s needed of a modern-day centre-half.

“I love the fact even with Benjamin White when he’s coming out and he said: ‘I don’t watch much football, I just play football’.”

“I love the fact that he’s brave enough and strong enough to admit that because he can deal with what comes with that.

“But when you look at his performances next to Gabriel, it’s very solid with the goalkeeper.

It’s a very good team, those three are very solid.

“Now Arsenal are looking like, with the structure and the way the team is playing, you can see if it has to go long they’ll do that.

But if a defender has to run it into the midfield and then go from there, we saw Ben White setting up Emile Smith Rowe’s goal the other day.

“So we’re looking at a team now with a lot of confidence.”

The former Gunners man is also impressed with the £30m man behind them in Aaron Ramsdale, a man recently credited with making the “best save in years”.

“I think they must be even more surprised with what he brings to that dressing room,”

“You can see it when he’s playing. What you do see is how the players just continually come round him.

“He’s a rallier and it’s something that Arsenal have needed.