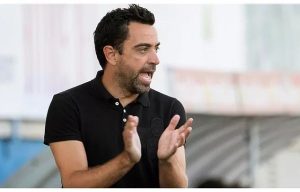 Xavi Hernandez has spoken about his potential move to become the new Barcelona head coach and he seems confident a deal will be done between the Blaugrana and his current club Al Sadd.

Speaking after his side’s 3-3 draw with Al Duhail. Xavi confirmed that talks have taken place and it appears it is only a matter of time before his return to Catalonia is confirmed.

“I’m a very positive person, the two clubs are in talks.”

“It’s a question of common sense and in the end it’s got to end up getting done. I’m excited.

“Both clubs know where I stand. I hope the matter can be tied up soon.”

So confident is the former midfielder that the clubs will reach an agreement.

After his agents have all but agreed terms with Barcelona representatives – that he is already looking forward to taking over the reins at the Camp Nou.

“It’s not about being the Messiah, it’s about bringing the excitement back.”

“There’s a good team and we have to work hard and stop worrying about ‘isms’.

We need to all be pulling in the same direction.

“We’re all looking forward to it and very excited.”