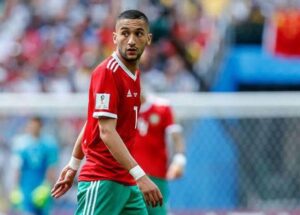 The 28-year-old has not played for the Atlas Lions since June last year, and was omitted from the squad for this year’s Africa Cup of Nations.

Since featuring against Ghana and Burkina Faso last June Ziyech has been involved in a war of words with Bosnian Halilhodzic regarding his availability for international duty.

and it appears Halilhodzic does not intend to select Ziyech for the two-legged play-off against the Democratic Republic of Congo for a spot in Qatar next month.

Morocco, who are looking to qualify for a second successive World Cup, were beaten quarter-finalists at the Nations Cup in Cameroon.

“I will not return to the national team, and this is my final decision.”

“I am focussing on what I am doing with my club.”

“Everyone has seen what happened in the last period.”

“I am sad but this is my final decision.

“The coach of the national team made his decision, and in any case I respect it.

My focus now, as I said, is only on Chelsea.”

Ziyech is with the Blues in Abu Dhabi as the Premier League club prepare to face Saudi Arabian side Al-Hilal in the semi-finals of the Club World Cup on Wednesday.

He was born in the Netherlands and represented them at youth international level, but switched allegiance to Morocco in 2015.

He won 39 caps for the North Africans and scored 17 goals.