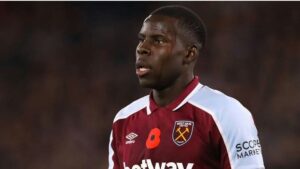 Former Chelsea defender Zouma has issued an apology after a video of him kicking and slapping his cat went viral.

The centre-back has insisted that this was a one-off, but he is still expected to be dropped for West Ham’s Tuesday night Premier League game against Watford.

The club are discussing the matter internally and will decide how long the centre-back should sit out for, while the player is also expected to go on an RSPCA education programme.

West Ham released a statement too, after the clip of their player went viral.

“West Ham unreservedly condemn the actions of our player Kurt Zouma in the video that has circulated.”

“We have spoken to Kurt Zouma and will be dealing with the matter internally, but we would like to make it clear that we in no way condone cruelty towards animals.”

Read Also: Eriksen Reveals What He Told His Wife After He Suffered A Heart Scare At Euro 2020,

“I want to say how deeply sorry I am to anyone who was upset by the video,l.”

“I would like to assure everyone that our two cats are perfectly fine and healthy.

“They are loved and cherished by our entire family, and this behaviour was an isolated incident that will not happen again.”