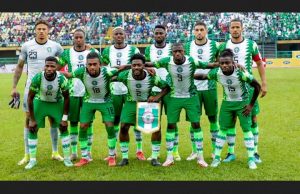 Following his clean sheet against Liberia, the Sparta Rotterdam shot-stopper has been,

In the absence of vice-captain William Troost-Ekong, the Spain based centre-back,

will marshal the backline of the three-time African kings.

The Paderborn left-back has been given the nod to start ahead of FC Porto’s Zaidu Sanusi.

Following Ola Aina’s return to his base, the Cyprus based star will be hoping to prove,

his worth from the right-wing against Bubista’s side

Alongside Bonke, the former Nigeria U17 star has been handed his maiden appearance,

in the three-time African champions’ squad. His creativity would be needed in dissecting Cape Verde’s midfield.

The 23-year-old has been in terrific form for his Russian Premier League side,

and he is expected to replicate that form against the hosts

The Turkey-based forward will be making his 100th international cap on Tuesday,

The FC Nantes star is expected to trouble the Blue Sharks’ backline with his blistering pace and dribbling skills.