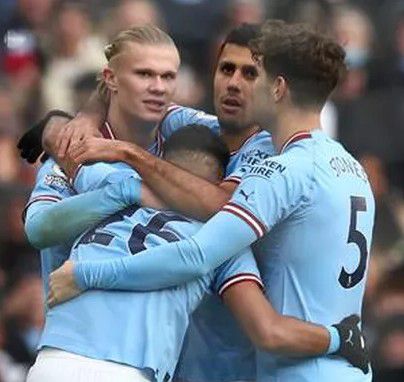 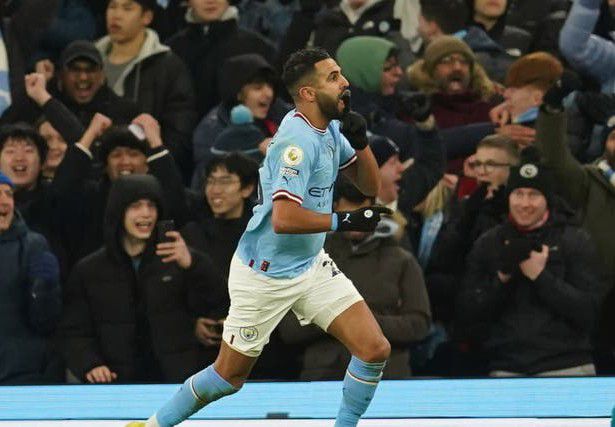 Manchester City came from two goals down to see off Tottenham in a 4-2 victory.

Tottenham with opening half goals by Dejan Kulusevski and Emerson Royal.

Manchester City responded immediately after the break through Julian Alvarez and Erling Haaland before Riyad Mahrez completed the turnaround with a brace.

But the game sparked into life as Spurs grabbed two goals in two minutes on the stroke of half-time.

Ederson was left red faced when he tried to play the ball out to Rodri but he was quickly closed down by Rodrigo Bentancur, leaving Kulusevski with a simple finish.

Just two minutes of stoppage-time was played, but there was still time for Spurs to double their advantage when Ederson could only parry Harry Kane’s shot and Emerson was in position to head in the rebound.

City came flying out of the blocks at the restart and within eight minutes they had restored parity.

Alvarez scrambled home following a cross from Mahrez to halve the deficit before Haaland levelled with a poacher’s header.

Ivan Perisic may have restored Spurs’ lead but his goal-bound shot was deflected onto the woodwork by the excellent Lewis.

It was fitting that Mahrez – at the centre of City’s first two goals – would complete the turnaround as he beat Lloris at his near post with an arrowed shot and scored another to make it four late on. 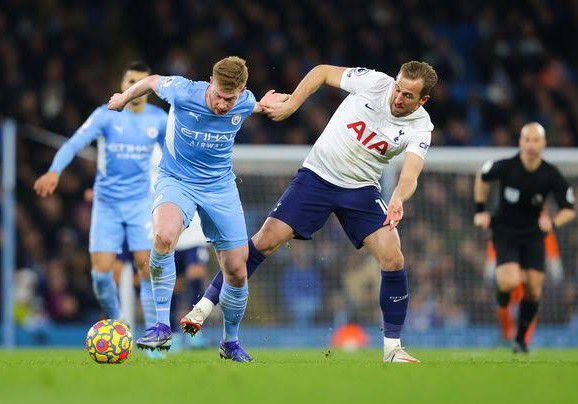 Manchester City and Tottenham Hotspur aim to bounce back as both suffered respective derby defeats at the weekend.

Guardiola has confirmed that Ruben Diaz and John Stones will be in contention to start against Tottenham alongside Kevin De Bruyne, who sparked concern when he missed training on Tuesday for personal reasons.

Dias has not played since before the World Cup and should see some minutes,

while Jack Grealish’s goal at Old Trafford could see him start ahead of an out-of-form Phil Foden.

Tottenham:  Antonio Conte faces a big decision in his front three for Thursday’s Premier League game against Manchester City, with Richarlison available following a cameo in Sunday’s defeat by Arsenal.

The Brazilian could start ahead of the out-of-form Heung-min Son but the latter is usually effective against City,

with Conte already predicting his side will enjoy no more than “20 or 25 per cent possession” – suggesting a counter-attacking approach which should suit the South Korean.

World Cup after recovering from an adductor strain, with 20-year-old Pape Matar Sarr expected to make way after a surprise full League debut in the north London derby.

Ivan Perisic will also be aiming to come back in at left wing-back after Conte’s surprise decision to start Ryan Sessegnon at the weekend. 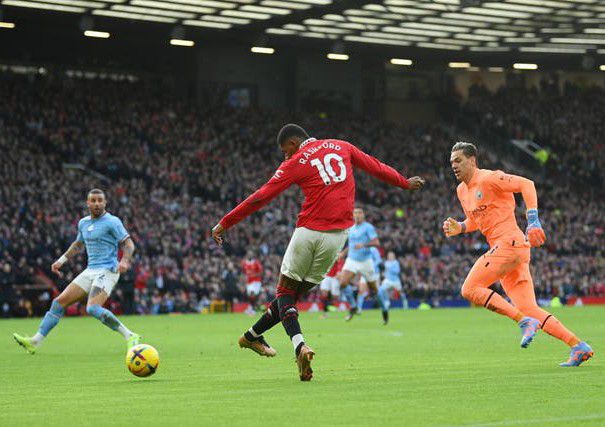 Manchester United came from behind to beat Manchester City thanks to Marcus Rashford winning goal.

City stepped up a gear following the interval and Grealish broke the deadlock within 193 seconds of emerging from the bench when he headed home Kevin De Bruyne’s cross on the hour mark.

Bruno Fernandes scored despite the presence of Marcus Rashford in an offside position, City’s protests that he had interfered with play ignored despite the flag going up.

Rashford was then perfectly placed to tuck in from close range eight minutes from time after a lovely turn and cross from substitute Alejandro Garnacho. 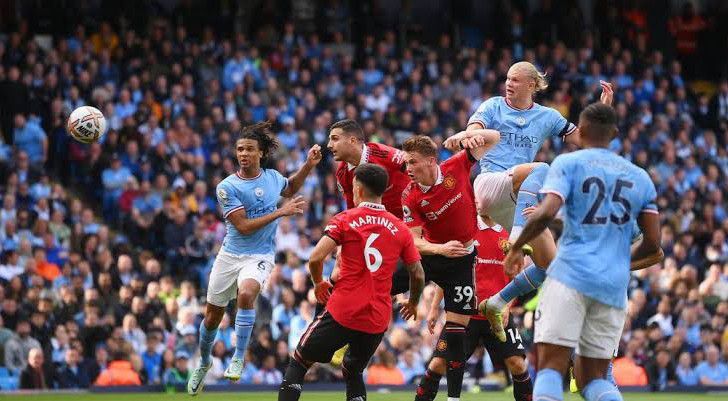 Manchester United will be seeking revenge when they host Manchester City after suffering a humbling 6-3 defeat at the Etihad Stadium in October.

Man United right-back Diogo Dalot is “not available” for Saturday’s derby due to a hamstring problem, while Donny van de Beek has been ruled out for the rest of the season with a serious knee injury.

Meanwhile United are not expected to give incoming new signing Wout Weghorst his debut against Manchester City.

Lisandro Martinez is ready for his first Premier League start since the World Cup,

partnering Raphael Varane at centre-back, meaning Luke Shaw can take his place at left-back after a stint in the middle.

Bruno Fernandes is available again after suspension and will support Martial alongside Antony and the in-form Marcus Rashford.

Manchester City:  The visitor will be without John Stones as they prepare to face Manchester United in the derby.

Manuel Akanji will come into the side to partner Aymeric Laporte, which will allow Kyle Walker to return at right-back.

Joao Cancelo has had a torrid time of last and will likely again be dropped.

Kalvin Phillips and Sergio Gomez will also drop out, as the likes of Kevin De Bruyne, Rodri and Bernardo Silva come in.

Erling Haaland will also return, likely supported by two of Phil Foden, Riyad Mahrez and Jack Grealish, as he looks to add to the hat-trick he scored in the reverse fixture earlier this season. 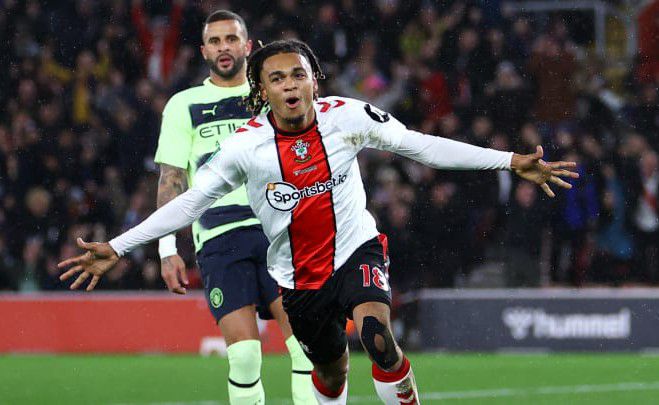 Southampton shocked Manchester City as they waltzed into the semi-finals of the Carabao Cup thanks to a 2-0 win.

The Saints scored twice before half-time to keep their dream of a first title alive, putting an unusually toothless opposition to bed in the process. 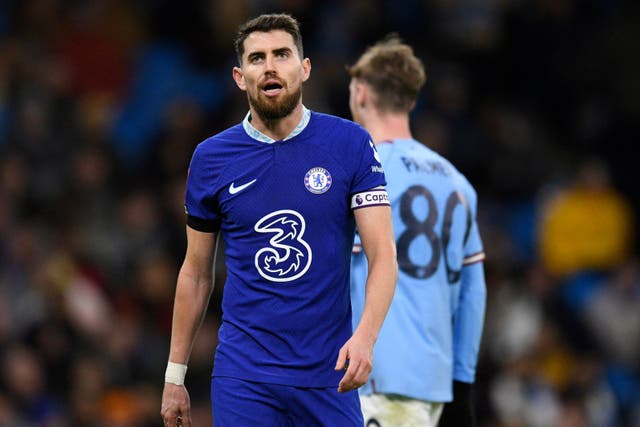 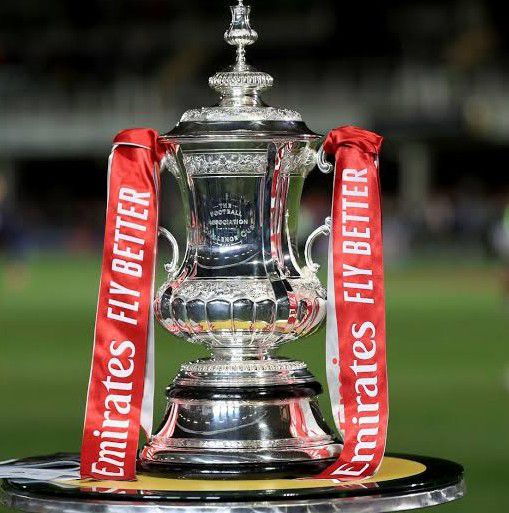 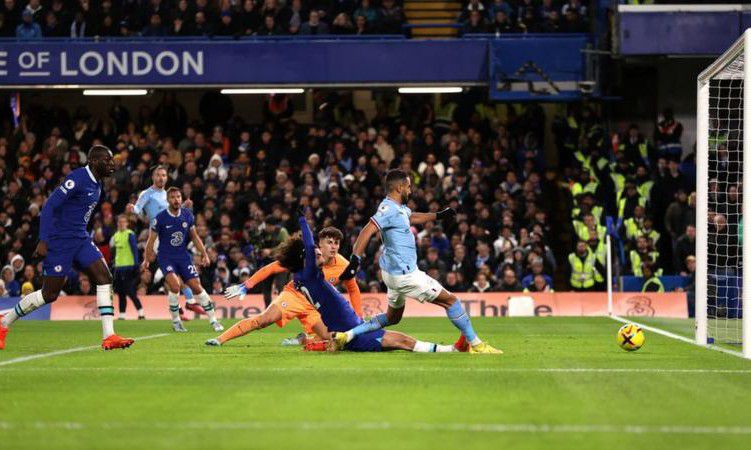 Manchester City defeat Chelsea by 1-0 as the result sees them move to within five points of Premier League leaders Arsenal.

Mahrez tapped home Jack Grealish‘s cross from close range just after the hour mark to grab Pep Guardiola’s side a deserved win on a night of few chances at Stamford Bridge.

It took some time for both teams to warm into this game, with Erling Haaland not even getting a touch of the ball until the 20th minute,

while Chelsea’s rhythm was disrupted by having to withdraw Raheem Sterling and Christian Pulisic due to injury.

City were like a different team in the second half, ominously dominating possession and creating chances for Nathan Ake,

who hit the post with a header, and Kevin De Bruyne, whose low effort was beaten away.

It did not look like it would be long until the deadlock was broken, and two substitutes

combined to give the visitors the lead just past the hour mark when Mahrez tapped home Grealish’s inviting cross. 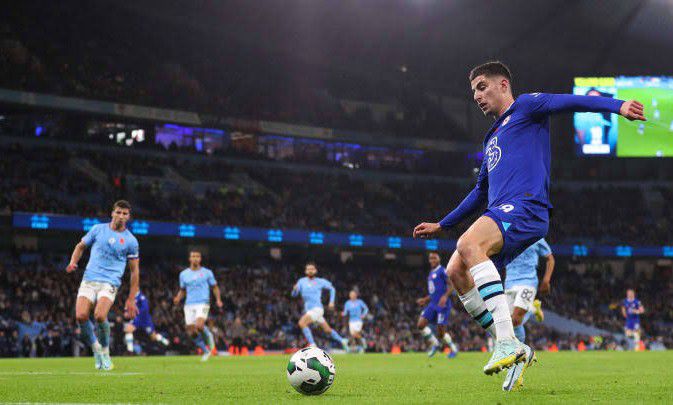 who have since been joined by Reece James and his latest knee problem, which could rule him out for up to a month.

Wesley Fofana is unlikely to make the cut here either, but there is optimism over Ruben Loftus-Cheek – who has now returned to training from

a calf injury – and Ben Chilwell, although the latter may have to wait until the trip to Fulham next week.

Edouard Mendy, meanwhile, is still absent with his shoulder issue.

while new £8.6million signing David Datro Fofana will not be thrown straight into first-team action.

With his options still diminished, Graham Potter could switch to the same back-three approach used against the champions in November,

albeit one which failed to prevent defeat in the Carabao Cup.

It would see Trevoh Chalobah reintroduced in the back line but a team largely similar to the one which failed to beat Forest on Sunday.