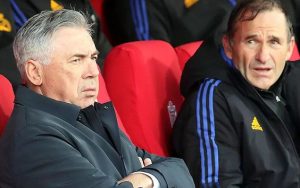 Carlo Ancelotti admitted in the wake of Real Madrid’s 4-1 win away at Granada that his midfield trio of Casemiro, Toni Kroos and Luka Modric do things in a magic ways.

The Italian coach  joked that Los Blancos’ legendary three midfielders could still be at this level in 2031, given how they have remained at the top for such a long time.

He said after the match:

“There’s not much to say, the level of the three is very high.”

“For me, they are still the best midfielders in the world.

The way the three of them are playing surprises me, because they do things that I don’t ask them to do, it just comes naturally.

And we’ll see what the future holds in ten years’ time, although for that we have [Eduardo] Camavinga, [Fede] Valverde and [Antonio] Blanco.”

Marco Asensio was included in Real Madrid’s starting line-up and he impressed, grabbing the game’s first goal 19 minutes in.

“He’s been a starter [in the last two games], he’s fulfilling the things I’m asking of him, he’s getting games and minutes.”

“But the most important thing is that when he plays he delivers and shows his best quality.”

Ancelotti was asked about whether there will be many alterations to his team in the next few weeks due to the number of games that Real Madrid have to play.

“Physically the team is fine, but [Eder] Militao has looked a bit tired and the truth is that Nacho [Fernandez] has done very well [today].”

“There may be changes in the next few games, I have confidence in those who are playing less.”