Arsenal and Crystal Palace face off in the Monday night action in the Premier League this evening.

Arteta sides are a lowly 13th in the top-flight table but have recovered from their woeful start to the season well.

There is possibility to jump up to ninth with a win tonight as they take on a familiar face.

Arsenal legend Patrick Vieira will take his Palace side across London to the Emirates as they look for just their second win of the campaign.

The Eagles are place below Arsenal and need to find some consistency to move away from the danger zone. 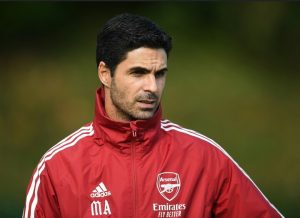 Arsenal remain without Granit Xhaka for tonight’s visit of Palace.

The midfielder suffered ligament damage in his right knee during last month’s win over Tottenham and will be missing until around the new year.

Gabriel Martinelli could also be absent while the Gunners will need to check on their returning international stars. 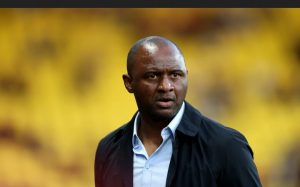 Palace have reported a clean bill of health from the international break.

Nathan Ferguson and Ebere Eze continue to make good progress with their recoveries from Achilles injuries.

But the pair will not be rushed back into first-team action.

Michael Olise could start after his impressive contribution as a substitute in the draw with Leicester last time out.

Though it was in their last such meeting in May (3-1 at Selhurst Park).

• Crystal Palace are unbeaten in their last three Premier League away games against Arsenal (W1 D2).

The Eagles had only avoided defeat in three of their previous 16 visits to Highbury/Emirates Stadium in league competition (W1 D2 L13).

• After an 11-game winless run in Premier League London derbies, Crystal Palace won their last such match 3-0 against Tottenham.

The Eagles haven’t won consecutive league derby matches since April 2017, which included a 3-0 win against Arsenal.

As many as they had in their previous 15 at the Emirates combined.

• Crystal Palace have conceded more goals from outside the box than any other side in the Premier League this season (5).

However, just two of Arsenal’s last 35 league goals have been from distance,

with Willian (vs West Brom in May) and Martin Ødegaard (vs Burnley this season) netting direct free-kicks.

• Coming into this weekend’s games, no side has conceded more first-half goals in the Premier League than Arsenal (6).

However, no other team have scored fewer goals before half-time than Crystal Palace this term (1).

Only five players making more for the club in the competition.

Vieira will be just the fourth person to have played for the Gunners in the Premier League,

and then managed against them in the competition, after David O’Leary (W3 D2 L9), Tony Adams (L1) and Remi Garde (L1).

Of goalkeepers to play more than once in the Premier League this season,

Arsenal’s Aaron Ramsdale has the best minutes per goal conceded ratio, with the Gunners conceding just one goal every 360 minutes on average with the Englishman in goal.

However, teammate Bernd Leno has the joint-worst such ratio in the competition this term (one every 30 minutes).

• Crystal Palace winger Wilfried Zaha has been pressured by opponents more often than any other player in the Premier League this season (341).

While the Ivorian has also been fouled more than anyone else in the competition this term (24).

Arteta is aiming to create the next generation of model Arsenal players to follow in the footsteps of Invincibles skipper Vieira.

Asked if the Gunners have a problem moving on from ‘heroes’ such as Vieira,

“It is, because normally they become heroes when they are successful and when you win football games and trophies.

“To do that, obviously you don’t just need an individual you need a squad.

And in this context probably, (right now) is the best-ever generation in Premier League history.

To become champions of this league, the top points that they used to have, today it wouldn’t be enough even today to win the Premier League.

“So that’s very significant as well but that has to be the aim.

The club has done it in the past and we are looking to do it again.”

Arteta was one of several Arsenal midfielders who would come after Vieira and be compared to the France World Cup winner.

“I think when you get that comparison you need to accept straight away that if you don’t win three or four Premier League titles, you will always be worse than the previous one,”

“They have already done it and you have just started, so for three or four years prepare yourself that you’re not going to be as good with every comparison.

“It’s impossible to achieve it in three weeks, so just focus on what you are as a player.

What you are asked by your manager to do, be yourself and don’t try to be anyone else.”