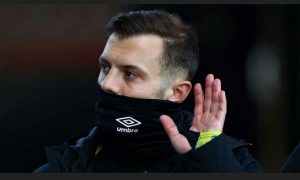 An Arsenal academy graduate who made 197 appearances in his first ten years as a professional footballer, Jack Wilshere is back training with Arsenal.

Wilshere, who has been plagued with injuries in recent years, is currently without a team.

After leaving Championship club Bournemouth at the end of last season.

He has joined up with his first club, where he was considered one of Arsenal’s brightest prospects.

When he broke into the first team aged 16, to maintain his fitness and so that he can work towards his coaching badges.

Arteta insists the former England international will not be playing for Arsenal’s first team anytime soon.

But believes he can be a very useful presence at the club’s training ground.

Read Also: Jamie O’Hara Urges Premier League To Be Reduced To 18 Teams To ‘Get Rid Of The Dross’

“What you should believe is that we want to help Jack prepare for his next stage, physically, mentally.”

“He wants to do his coaching badges again and we are prepared to fulfil all the needs that he wants.

That is basically the idea and it is no further than that.

“I am very happy to have him back.

We had a conversation with Jack and understand the needs that he has.

The period that he is going through and I think everyone at the club agreed it was the right moment to help him.

“We sat down with him and we listened to what he wanted to do.

And what stage he is and we are prepared to do anything we can to help him.

He is going to be continuing his coaching badges that he is very interested in.