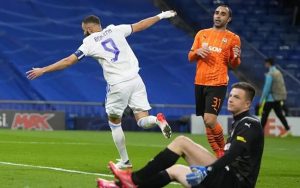 Real Madrid know they were on the verge of a historic milestone as they prepared to face Shakhtar Donetsk, needing just one goal to reach 1,000 in European Cup history. It’s no surprise that it was Karim Benzema who scored it.

The French striker had a simple tap after Vinicius set him up and he wrote his name into another piece of Real Madrid history.

In being the one to mark the milestone, Benzema joins illustrious names.

The player who started it all was Miguel Munoz, back in 1955 when he scored Los Blancos’ first ever European Cup goal.

Now, 999 goals and over half a century later, Benzema ensured Real Madrid became the first club in competition history to reach a four-figure goal tally, with no other team having scored as many in Europe’s top tournament.

On a personal level, Benzema took his own Champions League tally to 74, with 62 of those coming in Real Madrid colours. Only Raul (66) and Cristiano Ronaldo (106) are ahead of him in club history.

Benzema remains the overall fourth-top Champions League scorer of all time, behind only Robert Lewandowski, Lionel Messi and Ronaldo.