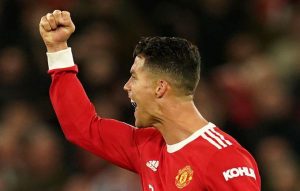 Former Juventus Forward Cristiano Ronaldo said he will “close the mouths” of his critics and that they “do not want to see” his defensive work.

He was greeted with fanfare and the six goals of his second spell at Old Trafford,

have proved pivotal in Europe and the Premier League, providing late winners in both of their Champions League group-stage victories to date.

However, United’s ropey form has not seen the five-time Ballon d’Or winner immune from criticism.

Data graphics have put the 36-year-old at the bottom of the pressing charts for forwards across the Premier League.

Which coupled with the club’s perceived soft underbelly has raised questions about Ronaldo’s overall impact.

In a length interview with Sky Sports ahead of sunday clash with Liverpool Ronaldo hit back at his critics as not wanting to see the positives of his game.

“I know when the team needs my help defensively.

But my role in the club is to win, help the team to win and to score goals – [the defensive side] is part of my job.

“The people who don’t want to see that is because they don’t like me.

But to be honest I’m 36, I win everything so am I going to be worried about the people who say bad things about me?

I sleep good at night. I go to my bed with my conscience very good.

Keep going with that because I will still close mouths and win things.

“Criticism is always part of the business. I’m not worried about that. And I see it as a good thing to be honest.

If they worry about me or they speak about me, it’s because they know my potential and value in football still.

So it’s good. I’ll give you an example: if you’re in a school and you’re the best student, you ask the worst student if he likes the best, they’ll say they don’t like him.

“I think the main word is that I’m still happy and enjoying football.

It doesn’t matter how many things I won in my career. I win everything but I’m still motivated.

I’m in a new chapter of my life, even with my age, and this is why I am here.

To try to win and I think Manchester needs to be at this level of winning and thinking to win big things so I’m here to help.”

There had been suggestions that Ronaldo’s arrival could inspire United to play a genuine role in this season’s title race.

But with eight games gone Ole Gunnar Solskjaer’s side sit five points off the league summit and have not won in three league matches.

Ronaldo said he gave his team-mates a motivational speech about how he wants to use his winning mentality to take them to that level.

“I said what I felt in that moment: that I’m here to win things.”

“Manchester United is a sign [of] winning things and I’m not here for holidays.

I said to them I see huge potential in this team; very young players, players with potential, and I’m here to win and to help the team to build new stuff.

“I didn’t sing because I told them that I sang a few years ago! But it was good.

The boys, they understand me, it was a good speech and I was happy that night.”

Maybe I’m thinking wrong, but this is the way I motivate myself and win stuff during my career and I play for the most important clubs in the world.

“So, as I said, criticism will always exist here.

I’m not hiding from that and, to be honest, I really don’t care because I know football is like that.

My reactions are what I feel at that moment. Most of the time when I talk it’s very, very positive but sometimes,

depending on the game, maybe you say things that you don’t agree or whatever but it’s me.

“Everyone knows me. I’ve always been like that; I’m not going to change now with my age.

I will always give 100 per cent for this club and my reactions is part of what I am. I don’t want to hurt anybody.

I know there will be eyes on me because of what I am, what I achieve, what I win.

“They don’t want to give me credit for the good things; they’re always going to find the bad things but for me it’s not a problem.

Life’s a constant lesson and I still learn with my mistakes, trying to improve the next game.”