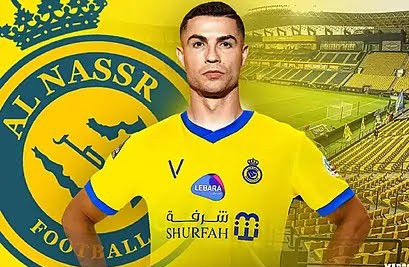 Cristiano Ronaldo is set to sign a 7-year deal with Saudi Arabia, worth £170m-a-year.

The first two-and-a-half years as a player for Al-Nassr and the rest of the contract as an official ambassador for Saudi Arabia and their 2030 World Cup bid.

According to MARCA the agreement may become official on Thursday, December 22,

or shortly after, once Cristiano has decided to head to Riyadh to sign a contract that will bind him to Al Nassr and Saudi Arabia until 2030.

Two and a half years of that will be as a player and the rest as an ambassador for Saudi Arabia’s bid alongside Egypt and Greece to host the 2030 World Cup.

Rumours has it that Ronaldo denied a move to Al-Nassr was close before Portugal’s World Cup exit at the hands of Morocco and before he returned to Madrid’s Valdebebas training base.

For the past two weeks, the striker has been thinking things over and although he was aware of the deal, he asked for some time off before

signing his signature on a commitment made following his departure from Manchester United. The striker is now expected to arrive imminently.

Meetings have taken place in recent weeks, but it was at the beginning of this week that Al Nassr found a way to shape the deal.

Al Nassr will release up to three players who will help ensure that CR7’s presence does not break financial control.

Masharipov and Pitty Martinez are the two candidates to leave.

From the beginning there has been talk of 200 million euros for each of the seasons.

The signing with Al Nassr will mean Cristiano Ronaldo’s farewell to elite soccer, at least in club competitions.

He has not found a new home in Europe and, with his agreement, he will once again feel like a leader and a point of reference, albeit away from the top level.

The Arab club already acknowledges the agreement, something they had been denying actively.

Ronaldo is expected to come out to break silent about the contract.