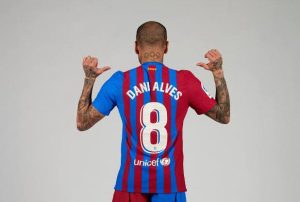 Dani Alves was named in the Barcelona squad to face Boca Juniors at the King Saud University Stadium on Tuesday in a tribute game for club legend Diego Maradona who passed away in 2020.

Everything indicates that Alves will play the first match of his second spell at Barcelona in Saudi Arabia, as he is not allowed to participate in LaLiga Santander until January when he can be registered by the Blaugrana.

“I am nervous after being away from this club for so long, and not being able to play, being here and defending the club and the team.”

“The moment and the most important challenge of my career arrived because of the club’s situation.

The challenges are for those who do not fear them. We will try to do our best for this badge.

“Playing is always special, wherever it is. I have a very good relationship with many people here.

It is about honouring one of the greatest [legends] of the club and that is special.”

Barcelona were drawn against Napoli in the Europa League playoffs and Alves expects another challenge for the struggling Blaugrana.

“I think we have to accept any kind of challenge.”

“We have to play in the Europa League and whenever we put on the Barcelona shirt, we are representing their history and we have to do it for the greatness of the club, regardless of the competition you face.

“Even when you play rock, paper or scissors, you have to win if you put on the Barcelona shirt.”