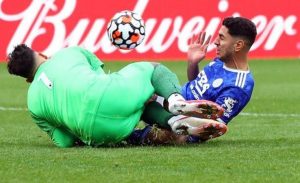 Brentford say goalkeeper David Raya will be out for “between four and five months” because of a knee injury.

The 26-year-old was hurt in a collision with Leicester City’s Ayoze Perez during his side’s 2-1 defeat on Sunday.

Raya has been the Bees’ first-choice goalkeeper during their nine games in the Premier League.

“David Raya has unfortunately sustained an injury to the posterior cruciate ligament in his left knee.”

“Positively, this type of injury usually heals well without the need for surgery.

“David has already begun using a brace specifically designed to aid this process.”

The club say they are expecting the Spaniard to return to fitness before the end of the season.

“We anticipate the recovery period for an injury like this to be somewhere between four and five months.

Which will enable David to be back to his previous high levels well before the end of the season.”