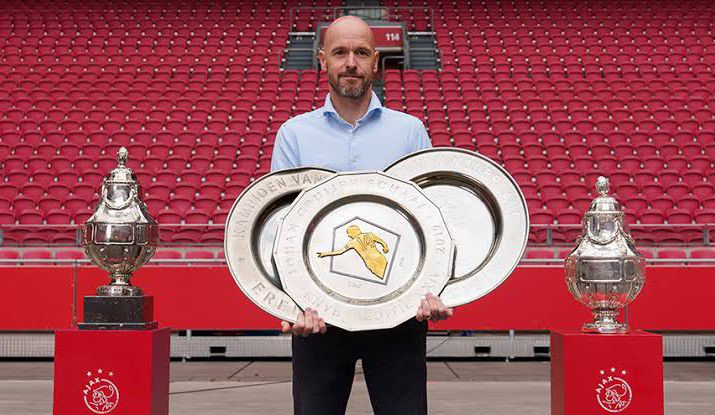 Ajax Boss Erik ten Hag is set to become Manchester United manager ahead of the 2022/23 season.

Since Solskjaer’s sacking in November, Ralf Rangnick has been in temporary charge of

first-team matters with the German set to move into an advisory role at the end of 2021/22 campaign.

Sportdaylight understands that Rangnick’s choice for the job was Ten Hag.

The question is, just what sort of coach are Manchester United getting?

The first trophy of Ten Hag’s career came during his time in charge of Bayern Munich’s second-string.

Under his guidance Die Roten’s young guns secured the Regionalliga Bayern title, a league which acts as one of the feeder division to Germany’s third tier.

Ten Hag’s first proper trophy came in May 2019, when he oversaw Ajax’s 4-0 victory over Willem II in the KNVB Cup final.

Daley Blind opened the scoring for the favourites, before a brace from

Ajax followed up their cup success by securing the Eredivisie title a few weeks later.

Top spot was only assured late on in the season after a wobble from long-time leaders PSV Eindhoven.

Ajax’s old rivals sat in first for 25 straight matchdays before Ten Hag’s side finally wrestled their way back to the summit in the final weeks of the season.

The Johan Cruyff Shield is the equivalent to the Community Shield in England with the Eredivisie holders squaring off against the KNVB Cup winners.

However, as Ajax lifted both trophies the previously the season they instead squared off against league runners-up PSV in a one-off game.

With the 2019/20 Dutch domestic season cancelled due to the pandemic, Ajax would have to wait until 2021 to defend their KNVB Cup title.

They met Vitesse in the final and won in dramatic circumstances.

Ryan Gravenberch opened the scoring in the first half but Ajax were soon pegged back by Ikoma Openda.

David Neres then left it late – very, very late – to seal victory, popping up with a strike in the 91st minute to send the trophy back to Amsterdam.

PSV ran Ajax close in 2018/19 but the big dogs of Dutch football reasserted their authority during the 2020/21 campaign.

Ten Hag’s charges were crown champions by 16 points this time around,

even though their top scorer, Dusan Tadic, only managed 14 goals.