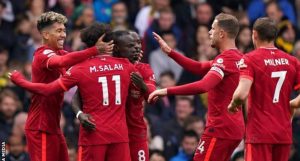 Roberto Firmino scored a hat-trick as rampant Liverpool condemned Claudio Ranieri to a miserable start to life as Watford manager in a one-sided game at Vicarage Road.

Jugen Klopp sides win takes them top of the Premier League table for now with Chelsea playing away to Brentford later.

Klopp will be extremely pleased with his team who are firing on all cylinders and unbeaten in 18 Premier League matches now.

Watford drop to 15th with their goal difference having taken a big dent.

Liverpool have put in a five-star display to swat the Hornets aside with ease.

Klopp’s front three were imperious throughout as Firmino grabbed a hat-trick and Salah and Mane also got on the scoresheet.

Ranieri has work to do if he’s to fulfil his task of keeping Watford up.