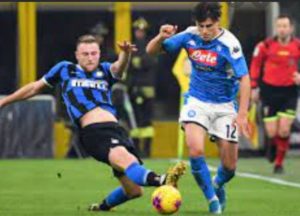 That is an absolutely sublime counter attack from Inter, after Correa ran almost an entire half, before playing in Lautaro Martinez, whose pinpoint finish gives the hosts a two goal cushion.

Napoli could be heading for their first defeat of the season here, unless they can change things rapidly!

Not too much to report on since that substitution, with it knocking a little of the pace out of the game.

Napoli continue to push for an equaliser though.

Inter Milan has just one loss this season, with seven wins and four draws.
The team has scored more goals than Napoli, with 29 to Napoli’s 24, but the difference in goals allowed means that Inter is four goals back in goal differential.

Inter: With 25 points from a possible 36 leaving themin third place, this is not the Inter of last season. At the same time, this remains a good team. Last time out at home, it was a 1-1 draw with Milan to extend an unbeaten run to four.

Inter have fared better in their meetings of late and are unbeaten in the last four Serie A meetings with Napoli winless since May 2019 in this one. Edin Dzeko leads the scoring charts with seven goals so far while Inter’s overall home unbeaten streak is 22 which dates to October 2020.

Napoli: Surprisingly held by Hellas Verona last time out, Napoli have dropped just four points so far this season. Victor Osimhen and Lorenzo Insigne have nine goals together while Spalletti’s men are unbeaten on the road in 13 and are yet to lose anywhere this season.

Napoli’s last defeat away from home came back in February against AtalantaBC.