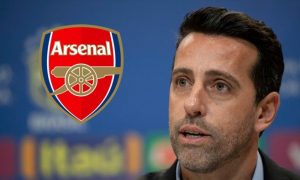 Arteta side should not be judged too harshly for their disastrous start to the Premier League campaign,

because the team has not been at full strength, technical director Edu says.

The Gunners are bottom of the table, having failed to register any points or score a single goal after three matches.

Defeats to Brentford, Chelsea and Manchester City have left fans upset and calling for drastic changes to be made.

But with the likes of Pierre-Emerick Aubameyang, Alexandre Lacazette, Nicolas Pepe and new signing Ben White,

missing some matches while Thomas Partey, Gabriel and Eddie Nketiah are still out of action,

Edu says it is unfair to write them off completely at this point.

“Of course, it has hurt us to be in that situation. We are hurt, I am hurt.

“To be fair, we have had three games and I haven’t seen the team playing together yet.

All three games we have played against Brentford, Chelsea and Manchester City,

unfortunately we have had some difficult moments in terms of Covid and injuries.

Then, after that, no problem. Judge us then.

“I understand the situation we are in now is really tough.

It’s not an excuse but let’s judge the team when they play together. “

The club’s strategy has left supporters disappointed and pessimistic about the current season,

but the director says they are focused on building a solid foundation on which they can improve.

“Yes, I understand the reason [the fans are not impressed] because firstly,

they have not seen the team playing together yet,” he said.

“That’s one of the reasons, but I think we have to see the wider context than just to see the money around it.

“We signed six players who are under 23, which means a lot in terms of our planning.

Normally, people like to see just one window, so I have to say it is the bigger picture,

because we started planning this squad a year ago in terms of consolidating the team and to try to get a better foundation.

“If you remember, in that period we renewed Bukayo Saka and Gabriel Martinelli a year ago,

with the intention to get that kind of base in the team.

We renewed seven players in this period as well, just in the first team. Five of the seven are under 23 as well.

“Why did we do that? Because we have a reason to try again to create a good foundation,

and then, one day, maybe we are going to sign one or two players only.

But after that, it’s impossible to sign one or two players only because we have a lot to do.”

“The case here is we really believe in the players we have in the squad.

Maybe other people don’t but we do. If we start to see the squad together, we believe in the squad.”