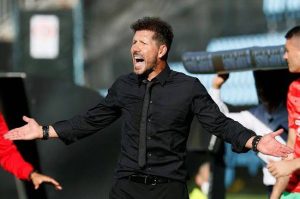 Jurgen Klopp says he respects “result machine” Diego Simeone but he could not coach Atletico Madrid’s style of play.

Scene of the club’s Champions League triumph in 2019 – in a meeting of two of Europe’s most successful managers.

After their most recent meeting in which Atletico knocked out then holders Liverpool in the last 16 of the Champions League in 2020.

Klopp questioned why the Spanish side had not played “proper football”.

Klopp says his comments were based on emotion at the time.

With the match Liverpool’s last prior to the coronavirus pandemic causing a suspension to the football calendar.

“He is the current Spanish champion. Very successful at [Atletico].

He has a bunch of world-class players, keeps them on their toes, they fight with all they have for their lives.

“That says a lot about the quality of Diego so I couldn’t respect more what they do.

“Do I like it? Not too much but that is normal because I prefer a different kind of football.

That’s me. Other coaches prefer different styles of football.

Nobody has to like it, it just has to be successful and that is what Atletico is for sure.”

Klopp is aware his side will need to be “top class” and “incredibly brave” or Atletico “will eat you”.

Atletico, who re-signed Antoine Griezmann on a season-long loan from Barcelona in the summer,

are widely perceived to now play a more attacking style of play albeit still with their renowned defensive resilience.

“They are still the result machine they were before,”

“I am a very positive person, but I am not that positive or naive that I think we have these games already in our pocket.

“They have changed players and system so we face a different animal, but not a weaker one.”

Prior to Klopp’s news conference, Simeone, whose side are fourth in La Liga,

was asked what he had to say to the German manager’s criticism from 2020 and with a smile he simply replied “nothing”.

“All I care about really is Liverpool but Mohamed Salah is an extraordinary player.

Who has been playing at a fantastic level for the last few years with Liverpool and his national team.”

“Liverpool are going through a fantastic spell of football.

They seem to have a different rhythm, and it is a pleasure to see them play.

“They have no fear to leave spaces at the back. They press high, play a high line, have speed.

Which is important even for an attacking team like Liverpool, and he brings security they didn’t have last year.

“I don’t expect anything other than a team who will make things very difficult for us.

“We need to match their intensity and then look for our own chances. We will try to find ways to hurt them.

“The last time we faced Liverpool, we won the game at home before we even entered the stadium. I want that to be remembered.”