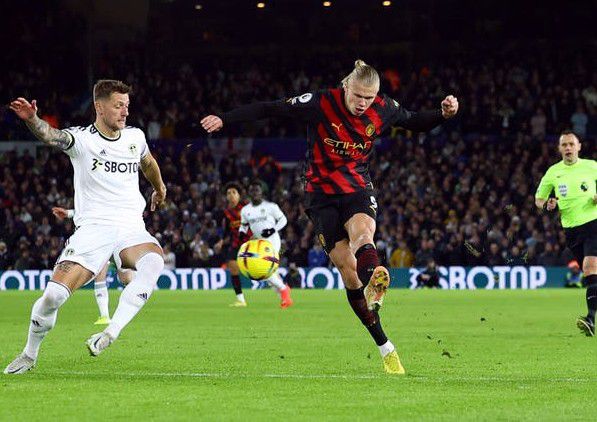 Manchester City back to second on the table as Erling Haaland scored his 20th Premier League goal of the season a 3-1 victory over Leeds United.

Rodri’s goal on the stroke of half-time gave City the breakthrough and Haaland registered on the scoresheet twice in the second half.

The early signs were ominous for Leeds as Haaland was slipped in with less than a minute on the clock but was repelled by Illan Meslier, who would go on to have a busy night.

Manchester City finally got their opener in first half added-time when Meslier parried Riyad Mahrez’s shot into the path of Rodri who was left with a simple tap-in.

unselfishly rolled it to Haaland who slotted City’s second into an empty net.

Grealish registered his second assist of the night when he found Haaland at the near post with a neat cut-back and the former Dortmund striker tucked a first-time effort past Meslier.

Haaland spurned an excellent chance for a hat-trick, and, at the opposite end, Joe Gelhardt almost set up a grandstand finish with a shot that went just wide.