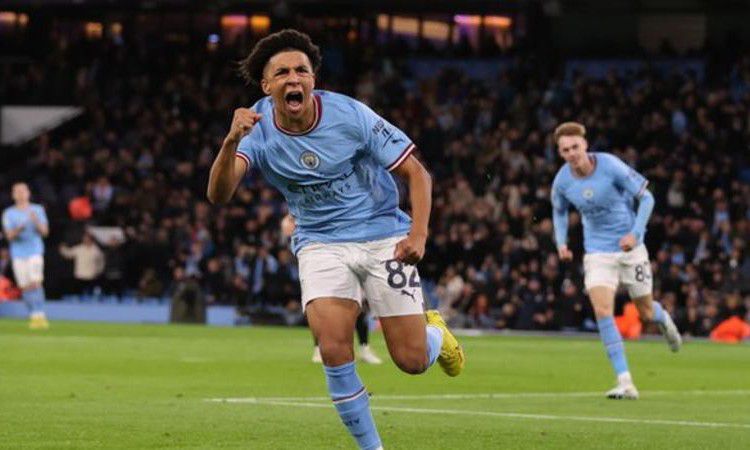 Seventeen-year-old Rico Lewis scored on his full Manchester City debut as the Blues came from behind to beat Sevilla in their final Champions League group game.

Man City were trailing to a first-half header from former Wolves and Nottingham Forest striker Rafa Mir when Lewis strode on to Julian Alvarez’s pass seven minutes after the break and drove a powerful shot past Yassine Bounou.

It was a moment Lewis will remember for the rest of his life and the joy on his face as he celebrated was something to behold.

But if the young full-back needed a reminder of the sustained quality required to make it at City,

Read Also: Salah Hail ‘Napoli As One Of The Best Teams In The World’

he got it through a superb curling pass from substitute Kevin de Bruyne for the Blues’ second, which went around the back of the Sevilla defence and sent Alvarez running clear.

Riyad Mahrez wrapped up the scoring seven minutes from time.

City are now unbeaten in 23 Champions League games at the Etihad Stadium and, with prolific front-man Erling Haaland watching from the

stands and Kyle Walker and Kalvin Phillips to return from injury, no-one will relish facing them when the competition resumes in February.