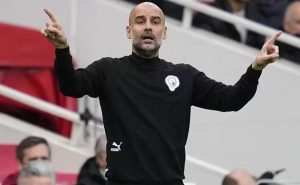 Pep Guardiola admitted that his Manchester City side were a little lucky to beat Arsenal 2-1 on Saturday afternoon.

He insisting that his Premier League champions had “no energy” for their trip to North London.

Despite their hosts going down to 10 men,

City struggled to get over the line against the Gunners, who were themselves without coach Mikel Arteta after he had tested positive for COVID-19.

“Arsenal were better, We faced a team that in recent years has struggled to be in the top four.

“They have six days after beating Norwich, we have two days.

It was so tough for us to come back. We had no energy.

That is why we put one more player in the middle to get more control and passes.”

Manchester City have now won 11 straight games, something the Guardiola takes a lot of pride from in these trying times.

“Eleven games in a row is great in this period.”

“Look at our bench. We have four academy players.

We had many cases of COVID this season and injuries.

“Phil Foden today. Today with Kyle Walker was his first time on the bench since COVID testing.

We were incredibly tired and they were better. But football has happened. Sometimes it comes in our side.”

The visitors winner came through Rodri in the 93rd minute, which the Catalan explained was something of a novelty for his side.

“We are not a team to score in the 90th minute or added time.”

“I don’t remember the last time [it happened].

Maybe two or three years ago with Raheem [Sterling] against Southampton.

“We do not have this characteristic. But with 10 vs 11 they changed the system and it took mistakes to win the game.”